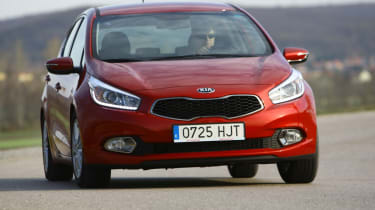 Pleasant probably isn’t the word Kia would want to describe the petrol Cee’d, but it’s a nice, relaxing drive that impresses in most areas – just don’t expect huge fun at the wheel. Still, the interior trumps the Ford Focus for space and it’s an attractive design, too. This car won’t blow rivals out of the water, but it gives them something to think about.

Kia is supposed to be the sportier of the Hyundai/Kia brands, but so far there’s been little to show for it.
Where Hyundai has the Veloster coupe, Kia has, er, well, not a lot to raise the pulse. So can a perky petrol motor inject a bit of life and soul into the new Kia Cee’d that we were impressed with in diesel form last month?
Kia’s latest 1.6-litre engine, which debuted in the Sportage, features direct injection to optimise performance and a stop-start system as standard to improve mpg and emissions. Figures of 133bhp and claimed economy of 54mpg, with 119g/km, are pretty reasonable, too.
It sounds sporty enough, with a throaty engine note under acceleration, although that settles down nicely when you treat the throttle more gently. However, it’s not an especially powerful performer.

While the acceleration sounds rapid, there’s not much else to put a smile on your face – a 0-62mph time of 9.9 seconds is adequate, but there’s a lack of in-gear punch that’s a bit disappointing.
In fact, it doesn’t feel a whole lot sportier than the 1.6D we tested – and that posts economy and emissions figures of 76.3mpg and 97g/km respectively.
Sadly, the chassis doesn’t live up to Kia’s sporty billing, either – it errs on the side of easy-does-it rather than thrill-a-minute.
The ride is mostly comfortable, but firm at times – especially if your car comes with Hankook tyres rather than Continental ones. But the steering is too light, not direct enough and weights up oddly as you turn the wheel.
Kia has confirmed a hot version of the Cee’d will arrive in 2013, featuring a turbocharged version of this 1.6-litre petrol engine, which is an exciting prospect. But the chassis and steering will need significant tweaking if the Cee’d is to keep up with class-leaders like the VW Golf GTI and new Ford Focus ST.
So, even with this 1.6 petrol engine under the bonnet, the Kia’s trump cards are its space (it’s impressively generous from front to back), the kit you’re likely to get, the quality, which is up with the class best, and the company’s ever-impressive seven-year warranty.
It’s easy on the eye too, with its large ‘Tiger’ grille and oversized headlamps that swoop around the sides of the car. If you’re just after an easy life, the Cee’d ticks an awful lot of boxes.