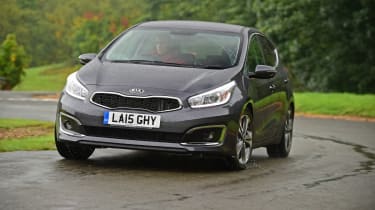 The highlight here is Kia’s new three-cylinder 1.0-litre turbo petrol, which was lacking from the old line-up. Coming in 99bhp and 118bhp versions, it offers smooth torque with strong refinement. The higher-powered version is quicker, taking 11.1 seconds to accelerate from 0-62mph, which feels adequate on the road.

The six-speed manual is light and easy to use, aiding the impressive refinement and zippy performance on the road given the small engine and the size of the Cee’d.

There is still a pair of naturally aspirated petrols, but their emissions and performance can’t match the 1.0-litre ecoTurbo, even if the three-cylinder engine will be more expensive when full range pricing is confirmed.

When it comes to the diesels, it’s the 1.6 CRDI that’s the one to go for. The 1.4 is acceptable, but the refinement from the larger capacity oil burner is better – plus there’s more performance on offer. 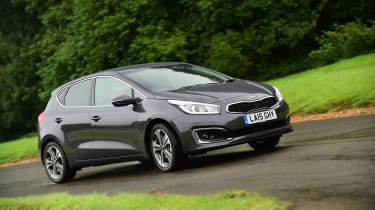 Like the 1.0 turbo, it comes with two power outputs, and if you go for the more potent 134bhp version there’s lots of smooth torque that delivers acceleration on a par with its rivals. The 0-62mph sprint takes 10.2 seconds if you go for the six-speed manual and 10.6 if you opt for the new seven-speed dual-clutch transmission.

Unlike some DCT gearboxes fitted to performance cars, however, this transmission focuses on smoothness and refinement, shuffling cogs with little fuss but a noticeable delay. The steering wheel shift paddles aren’t really necessary, and we’d advise leaving the gearbox in auto mode for most of the time.

Here it helps when you want a burst of acceleration, as despite the delay the seven-speed unit kicks down smoothly. The engine revs sweetly and is relatively quiet for a diesel, as Kia has worked harder on improving refinement in this facelifted car with even more sound deadening.

However, one area where the Cee’d isn’t any better is the steering. The wheel is devoid of any feedback, and although it’s light making the car easy to manoeuvre in tight spaces, on more open roads it feels lifeless and gives the car a lethargic feel.

The ride is improved over its predecessor, with a little more compliance over bumps and a more settled gait at high speeds. However, there’s still a firm edge to the suspension’s damping, which is highlighted on bumpier country roads.

Kia offers a fashionable 1.0-litre 3-cylinder engine with two power outputs in the Cee'd, and CO2 emissions are now down to 115g/km in the higher-power variant of this engine. It’s refined, relatively torquey and a good first effort from Kia at a turbocharged triple.

However, if you’re thinking of test driving this engine, make sure you sample both power outputs to see if the 99bhp version is adequate for you. Despite the same 171Nm of torque, it is 1.7 seconds slower from 0-62mph than the 118bhp version.

Elsewhere, a range of petrol and diesel options are available. The highest-powered 1.6-litre diesel is the only engine to come with Kia's dual-clutch DCT transmission, though - the other engines get an old-fashioned torque converter, which saps power and increases fuel consumption.