We get behind the wheel of Kia's forthcoming hybrid crossover; Niro will sit between Soul and Sportage 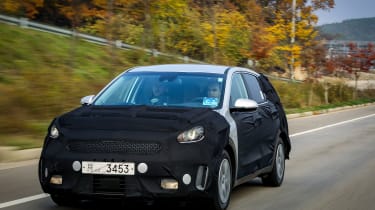 Test driving an early prototype can often be short on feedback, but the Niro gave us a good insight into the car that’s around 12 months from launch. While not especially daring in design, there’s no denying it looks quietly expensive in the metal and under the camo. The hybrid powertrain works well and the car feels good to drive. Kia could well have cracked the compact SUV hybrid segment and produced an interesting alternative to the Toyota Prius.

Kia is putting the final touches to a radical rival for Toyota’s all-conquering Prius. Due to launch late next year, the hybrid crossover has been designed to create a brand new market segment – and Auto Express has driven it.

In a surprising move, Kia has decided to call the hybrid crossover ‘Niro’. Up until now, Niro has been the name assigned to Kia’s 2013 Frankfurt Motor Show concept car, and widely thought would be used on the production car that’ll do battle with the Nissan Juke and replace Kia’s aging Venga compact MPV in 2018. However, bosses have deemed the name to be more suitable for its first ever hybrid crossover.

In fact, the Niro will be the first small SUV crossover that uses a hybrid powertrain on the market for now. At 4,355mm long it fits between the Soul and new Sportage in the size. And while it looks wider than the new Sportage, the Niro is actually 55mm narrower – a look that’s helped by the squatter roofline – and it sits 100mm lower, too.

Our pictures help to give an idea of the proportions of the car, but sadly don’t reveal the stylistic details. Auto Express was treated to a walk-around of an un-camouflaged car at Kia’s top-secret R&D facility in Namyang, South Korea, and it was clear to see it looks different from any other Kia on sale – it’s quite plain. Kia’s trademark ‘Tiger Nose’ is present but it’s thinner and wider on the Niro – it’s similar to the grille used on the recently facelifted Cee’d but has a thick black outer lip surrounding a chrome strip. Underneath there’s a secondary grille with horizontal LED day-running lights incorporated and to the outer edges of the bumper there are vertical vents. The headlights, however, are familiar and similar in design to the new Sportage. 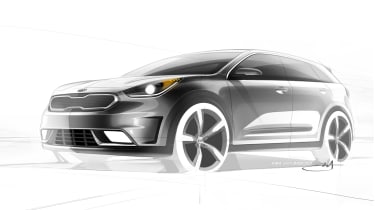 It’s at the side where the plain styling is most obvious with only a thick bump strip covering the lower edge of the doors, and body cladding around the wheelarches being the stylistic highlights. Our car’s 16-inch wheels looked a little lost in the arches but 18-inch alloys will also be available. Our pictures hide the gently arching roofline that’s topped off with a spoiler and frame the boxy rear-end; the light clusters with integrated LED brake lights are neat as is the rear-view camera that’s incorporated into the wiper.

The simple design continues on the inside, too. An uncluttered dashboard features a large touchscreen and rows of vertical buttons but it’s packed with the latest technology like wireless phone charging, Android Auto smartphone compatibility (Kia is working on adding Apple CarPlay, too) and luxury features such as heated and cooling seats and a heated steering wheel. Futuristic dials in the instrument cluster look neat, and there’s a long list of safety kit too including automatic emergency braking, adaptive cruise control, blind sport monitoring and seven airbags. 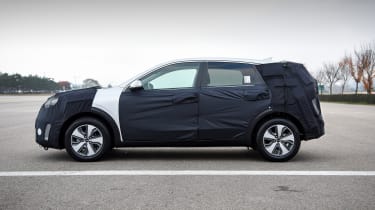 The big news is that the Niro uses a brand new platform that was designed specifically for a hybrid powertrain. For now the platform is solely for the new crossover but in time it should underpin a number of new products including a Niro plug-in hybrid version. The Niro is powered by a 1.6-litre petrol engine pushing out 104bhp and 147Nm of torque, a 1.56 kWh lithium-polymer and a 32kW electric motor – all through a six-speed double clutch auto box. It’s easily one of the smoothest hybrids on sale and quietly slips between electric and petrol power modes around town – it’s only when accelerating hard when joining a motorway, for example, does the petrol engine make itself heard.

Our test drive included a few twisting roads and the Niro impressed with flat handling, decent body control, and direct and well-weighted steering. The ride seemed unnecessarily firm and it was difficult to brake smoothly with the pedal not giving enough ‘feel’, but the car was an early prototype and not tuned for UK roads. That said, there was plenty of driver adjustment in the wheel and seat, and there was plenty of rear leg and headroom. The boot was adequate too thanks to the battery being mounted under the rear seat.

The Niro is just one of a raft of models Kia is bringing to market over the next five years. When it’s launched in around 12 months time, it’ll be joined by the new Optima, Optima Plug-in Hybrid and new Sportage. The year after will see the next Rio supermini and the Niro Plug-in Hybrid while 2018 is earmarked for a brand new Cee’d hatchback and a Nissan Juke-sized crossover. Towards the end of the decade, Kia will also a launch a fuel-cell car allowing the Korean firm to compete against the new Toyota Mirai, Honda FCV Clarity and its sister firm’s Hyundai ix35 Fuel Cell.