Kia’s Optima Sportswagon family estate gets plug-in hybrid boost, but how does it drive? 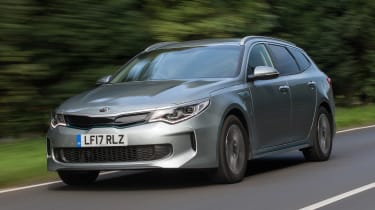 The new Kia Optima Sportswagon PHEV is a smooth, comfortable and practical family estate car, while its electrified powertrain also means it’s cheap to run and quick off the mark. Standard equipment is generous but the Volkswagen Passat GTE it shadows as a value alternative is better built and nicer to drive. Still, as a stylish and spacious company car that’ll cost mere peanuts to tax, it’s a very compelling proposition.

With the arrival of the Optima PHEV last year, Kia added another string to its electric bow. Joining the Soul EV, the saloon was the brand’s first plug-in hybrid model.

Kia’s engineers have now added the Niro PHEV, as well as an SW estate version of the plug-in Optima – driven here for the first time. It gets an enlarged battery pack (now 11.26kWh), which means an improved all-electric range of 38 miles.

Broadly speaking, the standalone PHEV model sits between the mid-range ‘3’ and flagship GT-Line S versions of the regular SW on spec (if not price), boasting an eight-inch touchscreen with sat-nav, black upholstery with fake leather trim and heated front seats. 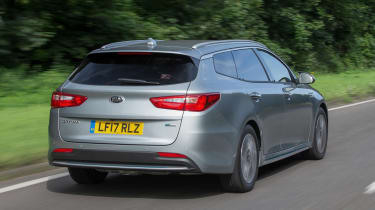 Kia adds a premium edge with a standard Harman Kardon audio system and wireless charging, while a reversing camera is also fitted. The panoramic roof seen on the GT Line S model isn’t found here, though.

In terms of tech, hill start assist, tyre pressure monitoring, cruise control and a speed limiter function all feature. However, Autonomous Emergency Braking is not included, although it’s another piece of kit present elsewhere in the range.

The electrified gubbins under the skin eats away at practicality, too. With a 440-litre boot, it’s 112 litres smaller than the load bay you’ll find on a diesel Optima SW. But for many, a car like this is bought on cost. After the UK Government’s Plug-in Car Grant, it undercuts the VW Passat GTE Estate with its 31-mile range by over £3,000, but the Kia is by no means a bargain – even on a monthly PCP deal a sub-£500 monthly repayment requires a big deposit or a reduced mileage allowance.

It can’t match the VW for quality, either, and hard plastics hide in plain sight. For business buyers, the nine per cent Benefit-in-Kind tax rating is par for the class, however, in line with the Toyota Prius Plug-in and MINI Countryman Cooper S E.

On the road, the light steering is responsive and complemented by a pleasing boost of instant torque from the electric motor. The Optima SW PHEV isn’t fast, though, and its pace dies down quite a bit after the initial electric surge. You’ll feel the lack of power most at high speeds, when the 2.0-litre petrol engine is left to do the hard work. It is comfortable, though, and is quiet in town centres when in pure electric mode.