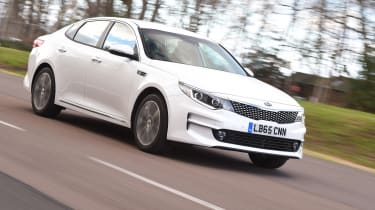 As an all-rounder, the Optima ticks a lot of boxes – it’s decent value, looks great and is now reasonably refined to drive. However, the traditional saloon is always going to struggle to appeal to buyers when an increasing number of compact crossovers and SUVs can do all of that and more for the same amount of cash. The plug-in hybrid model should inject some welcome interest when it arrives.

It's no secret that crossovers and SUVs are taking over in the hearts of the British car buyer – they now officially account for 22.5 per cent of cars sold across Europe. The family saloon is dying out, with some companies completely abandoning them. That hasn't stopped Kia, though.

Undeterred, the company is forging ahead with the all-new Optima, focusing on improving overall quality and refinement in a bid to cater to UK buyers’ tastes. 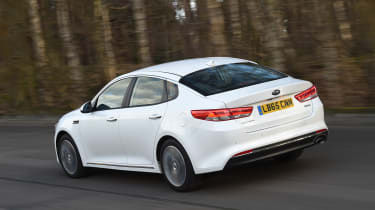 From the outside, the new front end looks a little sharper and the rear a little sleeker, but as this was already one of the more handsome family cars around, a complete overhaul wasn’t exactly necessary. It’s certainly better proportioned than the Ford Mondeo, although the latest Skoda Superb may just pip it in the style stakes.

The same cannot be said about the interior. It’s sturdy, well put together and moulded from soft leathers and plastics, but it looks uninviting. Its design is logical rather than likeable – yet you can’t take issue with the amount of equipment you’ll find yourself surrounded by. 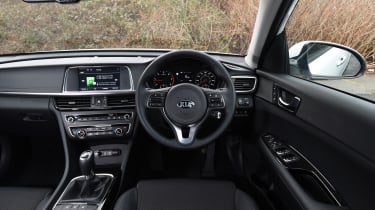 Go for the mid-spec Optima 3 we drove, and Kia will throw in an eight-inch infotainment system complete with navigation, a reversing camera, Harman Kardon sound system, 18-inch alloy wheels and dual-zone air-con as standard.

Until a plug-in hybrid version of the Optima arrives later this year, the only engine option you have is the old 1.7-litre diesel. It’s been tweaked to produce slightly more power and torque – there’s now 139bhp and 340Nm on tap – but crucially CO2 emissions have been cut by 14 per cent to 110g/km and fuel economy is up to 67.3mpg. Performance is adequate, with the 0-62mph sprint taking 10 seconds, but a far greater area of improvement has been with refinement. 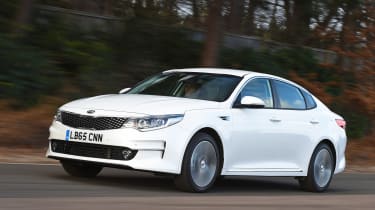 The stiffer body structure, retuned springs and dampers and added sound deadening make the latest Optima a far more relaxing car in which to cover ground. At motorway cruising speeds, the engine settles and wind noise is well suppressed, while potholes and rutted surfaces do little to upset the saloon’s composure or momentum.

The electric steering is a little too light and void of feel, plus the six-speed manual gearbox feels quite slack and limp between changes; but this car has clearly been set up with comfort in mind. What’s likely to be a better fit for the Optima’s character is the new seven-speed dual-clutch auto – just so long as you can afford the £1,400 premium.