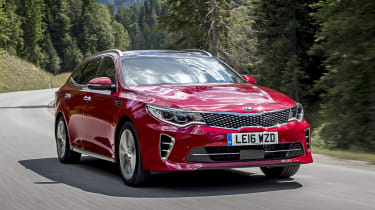 While the mid-spec Optima 3 makes a strong case for itself, it’s hard to recommend this flagship GT Line S. The lesser models offer plenty of kit, so unless you desperately want all our test car’s bells and whistles, a more modest variant makes greater sense. The same goes for the automatic gearbox, as £2,200 is a lot to ask for an (admittedly slick) self-shifter. Price isn’t everything, but a BMW 318d Sport Touring with the excellent auto box costs only a fraction more.

We’ve already delivered our verdict on Kia’s sleek new Optima Sportswagon – a practical estate version of the Optima saloon – in mid-spec 3 trim. But what if you want a more luxurious model with an automatic gearbox? Well, this posh GT Line S model with the seven-speed DCT could be just the ticket.

Commanding a huge £4,700 premium over the like-for-like 3-spec car, this range-topping GT Line S aims to take the fight to established compact executive cars like the BMW 3 Series and Audi A4. It’s certainly got the looks to match the fleet favourites, but can it compete on kit, costs and handling? 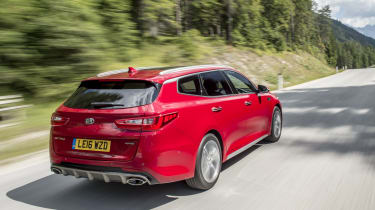 While the Optima SW in 3 guise already has sat-nav, a rear-view camera, automatic headlights and a Harman Kardon stereo, the GT Line S takes this up a notch with a sliding panoramic sunroof, LED lights and a powered tailgate. On top of this you’ll find ventilated front seats and heated rear seats, as well as sportier styling, dual exhausts, wireless phone charging and a load of extra safety kit.

The cabin and dash are lifted from the Optima 3, with the same eight-inch screen and soft-touch plastics. The plush seats are upgraded from part to full leather, while gloss trim around the gearlever adds a touch of class. The flat-bottomed steering wheel and alloy pedals feel a bit of a gimmick, though. 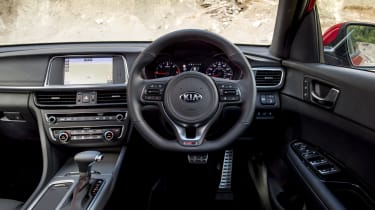 The automatic gearbox dents economy (Kia claims 61.4mpg vs 64.2mpg for the manual model), but most drivers will barely notice the shorter range between fill-ups. CO2 emissions increase from 113g/km to 120g/km, so private buyers escape any tax penalty, but Benefit-in-Kind tax jumps one percentage point for company car drivers.

On paper, there’s a more noticeable drop in performance, with the 0-60mph sprint taking 10.7 seconds against 9.8 seconds for the manual model. However, in reality, the smooth-shifting auto box allows you to effectively manage the engine’s torque, with quick changes on kickdown providing decent overtaking power.

It’s not as engaging from behind the wheel as the manual car, though, and the small steering paddles are tricky to operate when you’re driving in a hurry. But while the auto box isn’t well suited to spirited cross-country sprints, it makes light work of motorway journeys and stop-start town traffic. Like the manual, the DCT is smooth and refined at high speed. 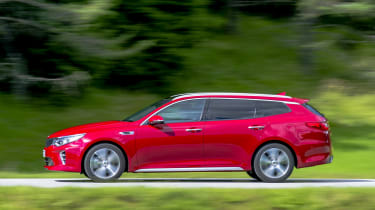 Otherwise, the Optima auto drives and handles like the manual. You get the same quick but lifeless steering, plus a compliant ride that results in noticeable body roll in corners. It can’t rival the BMW for fun, but it’s more than a match for mainstream rivals like the Ford Mondeo or Vauxhall Insignia.

Practicality is unaffected in the transition from 3 to GT Line S spec, so the spacious cabin and boot remain. There’s more room in the back than in the saloon due to the higher roofline, while the decent 552-litre load bay puts the 3 Series (495 litres) to shame, but trails the equally upmarket VW Passat (650 litres). Fold the rear seats and you liberate a class competitive 1,686 litres of space.