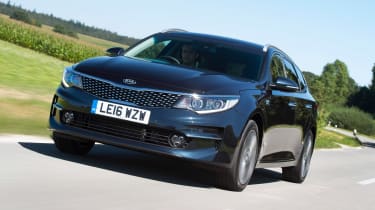 With good looks, plenty of space and a smart cabin the Kia Optima Sportswagon is well worth a look if you’re after a big family car. It’s good to drive too, if not hugely exciting, and although there’s only one engine available in the UK it’s a decent unit, being economical and fairly smooth. A Skoda Superb Estate is bigger and a Mazda 6 Tourer is better to drive, but the Kia still offers a great balance of abilities.

The Kia Optima Sportswagon is the first car Kia has ever made in the family estate segment, with the previous Optima being a saloon only. Rivals such as the Vauxhall Insignia, Ford Mondeo and Skoda Superb have all had estate variants in the past, but this is the first time Kia has taken them on directly.

The first hint that this car was on the way came in the shape of the 2015 Sportspace concept, and Kia says it’s transferred everything it could from that car to the production Optima Sportswagon. This shows in the design, as even though the front end is identical to an Optima saloon the raised roofline and sleek window shapes at the back mean the estate version looks even better than its sibling.

In fact it’s one of the best-looking estates in its class, with only the Mazda 6 Tourer beating it for style. It certainly stands out compared to the drab Skoda Superb and VW Passat Estate. 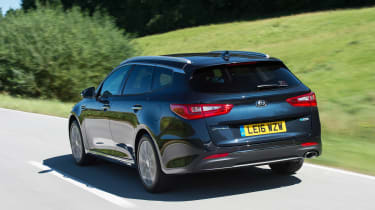 The Kia even manages to keep up with those tough rivals once you climb inside, with a neatly-designed cabin that feels well built and looks smart. With 552 litres of boot space in tse back, the Optima isn’t nearly as big as the Skoda Superb Estate (which has 660 litres), but it does beat the Mazda 6’s 522-litre load space. With the seats down it’s a similar story, with the Kia sitting between the two at 1,686 litres.

It’s a practical space, with a false floor that you can lift up for extra capacity as well as some handy nets either side of the main load area. The rear seats have more headroom than the saloon’s thanks to the higher roofline, and there’s a decent amount of legroom back there too.

The ergonomics of the cabin are well thought-out with a comfortable driving position thanks to the well-placed pedals, steering wheel and gearstick.

It’s good to drive too, partly due to input from ex-BMW M man Albert Biermann, who is now Kia and Hyundai’s engineering boss. The steering is quicker than the saloon’s, and while there’s not a huge amount of feel it does make the Sportswagon seem more agile and fun to drive.

There’s a bit more body roll in corners than you’d want but it’s an acceptable compromise given the decent ride quality. It felt smooth on our test drive though some particularly bad sections of mountain road did start to unsettle the car. We’ll have to try it out in the UK to get a proper idea of how well the Optima Sportswagon really rides but it made a solid first impression.

The 1.7-litre CRDi diesel is the only engine available in the UK, and while it’s not an outstanding unit, there’s little to complain about. It’s a bit noisy at idle and when pushing a bit harder, but at a cruise it’s quiet and smooth, plus there’s plenty of torque (340Nm) to rely on for overtaking. 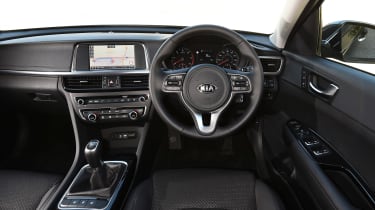 A 0-60mph time of 9.8 seconds is a bit sluggish, and below 1,500rpm it does drag its feet a bit, but it’s economical, managing 64.2mpg, and once you bring the revs up the 139bhp output is plenty. The manual gearbox is a pleasure to use as well, slotting smoothly into gear - it’s our pick of the gearbox options as while the 7-speed DCT version is good too, it isn’t as economical or as engaging.

There’s plenty of kit on board the Sportswagon, with this ‘3’ spec version getting an 8-inch sat-nav screen, electrically-adjustable driver’s seat, a premium audio system and some nicer-looking trim around the cabin. There’s also heated seats, 18-inch alloys and LED foglights.