It's no exaggeration to say that Kia dealers cried when the Pride supermini was killed off in 1998. The Mazda-based hatch was their bread and butter, and there has not been a small car in the Korean manufacturer's line-up since then. 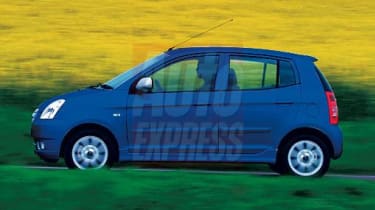 Miss out on the driver appeal of some competitors, the Kia Picanto is still a convincing overall package. What it lacks in driving enjoyment and style, it more than makes up for with comprehensive specification, a strong aftersales package and an aggressive pricing strategy. ing

It's no exaggeration to say that Kia dealers cried when the Pride supermini was killed off in 1998. The Mazda-based hatch was their bread and butter, and there has not been a small car in the Korean manufacturer's line-up since then. But now it's time for them to break out the Hovis again, because the Picanto is on sale.

As with the Pride, the newcomer is cheap and well equipped. Prices start at £5,495 for the entry-level 1.0-litre GS, rising to £6,995 for the range-topping 1.1 SE we drove at the UK launch. Our car was fitted with the manual five-speed gearbox, but for another £750 buyers can opt for an automatic transmission.

With such high expectations, the new model needs to be good. And it is - especially at this price. The pretty exterior has been styled to appeal to European tastes and, oddly shaped grille aside, it succeeds. We particularly like the chunky proportions and neat tail. Generous dimensions make the cabin spacious, and tall rear passengers get plenty of legroom, although their heads might brush the tapering roof.

Both the entry-level GS and mid-range LX are five-seaters, with 60/40 split-folding rear chairs, while the flagship SE accommodates four with a 50/50 split. Either way, the rear bench hinges up first, resulting in a flat loadspace when the rear seat is stowed.

In the front, all the dials and controls are clearly laid out and, although the materials are not up to the best standard, fit and finish are good. The list of equipment is also generous, with SE models benefiting from air-con, alloys and remote central locking.

The base GS isn't bereft of toys either. It gets power-steering, twin airbags, central locking and a fiddly CD radio with MP3 player. Body-coloured bumpers are standard, but an unpainted grille marks the model out. Although the steering wheel tilts, the driver's seat is fixed vertically. Nevertheless, the position is good, with great visibility despite those raked A-pillars.

Unusually for a bargain supermini, all-round disc brakes with ABS and electronic brakeforce distribution are standard. Sadly, however, there is no spare wheel, and a bottle of tyre-repair foam resides in the unexpectedly large space beneath the boot floor. With suspension tuned for UK roads, the ride and handling seem far better than on the European-specification cars we drove in Issue 796. Body roll is evident under enthusiastic cornering, but as the lacklustre engine discourages spirited driving, this is never a problem.

Low emissions and fuel consumption are the four-cylinder's strengths, and the 1.1-litre Picanto's C02 output of 119g/km compares well with the 135g/km of the similarly engined Fiat Panda. Keeping up with the traffic is no problem as long as you make good use of the gearstick - easy, thanks to its light action. At motorway speeds, the little hatch feels stable, although wind noise is noticeable when cruising.

However, this supermini is not intended to cover vast distances. Instead it excels in town, where great visibility and user-friendly controls make the Picanto a natural urban performer.