The all-new Kia Rio will be unveiled at the Geneva motor show, so we grabbed the chance to see if it's worth snapping up the outgoing model at a discount price. 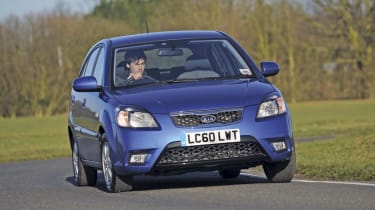 Kia’s reputation has shot up recently thanks to a new range of fantastic cars such as the Sportage, Venga and Cee’d. They manage to blend good on-road dynamics, solid build quality and a low price in a way that the Rio simply can’t match. There’s no doubt the next version will continue Kia’s fantastic run of form, but as it stands, this car – originally introduced in 2005 – serves as more of a reminder of how far the brand has come in recent years than an example of what it is capable of now. It may be cheap to buy and the seven-year warranty is an appealing prospect, but more modern rivals offer a better all-round package.

There’s a new Rio on the way, as our news story on Page 24 reveals, but it will have to go some to match the success of the current facelifted model. It was a massive hit under the Scrappage Scheme and continues to attract buyers, so we took the wheel of a 1.5 CRDi diesel-powered model to find out why it’s so popular.

The 109bhp four-cylinder unit starts quietly and remains hushed on the move – even at motorway speeds – plus offers plenty of punch around town. The 0-62mph time of 11.3 seconds can mean that the Rio sometimes struggles to keep up with fast-moving traffic outside of city limits, though.
Twisty back roads aren’t the Rio’s natural habitat, either. While the light controls make plenty of sense in stop-start traffic, they fail to inspire confidence on a twisty road and the front end can quickly lose grip if you approach a corner too quickly.
On the plus side, the diesel engine is efficient. Combined fuel economy stands at 62.8mpg and CO2 emissions of 119g/km are low enough to qualify for free road tax for the first year. It’s spacious, too. There’s enough room in the rear seats for adults and access is easy thanks to its five-door layout.
The boot is good for this class, with 270 litres of space on offer, but this increases to a large 1,145-litre load area when the back seats are folded flat. While it has its weaknesses, the Rio’s trump card is how little it costs – basic models fitted with this engine start at £8,995, but prices do go as low as £7,995 for a 1.4-litre petrol version.
The cost-cutting measures are obvious, though. At that price you don’t get central locking, air-conditioning, an alarm, or side and curtain airbags – unlike on our mid-range ‘2’ model. The design is basic, dated and the switches don’t have the kind of solid feeling found on more modern Kias – although the standard seven-year warranty will give buyers peace of mind.
Without the added value provided by Scrappage and with the new version coming later this year – which should continue the brand’s recent form of producing real class contenders – it’s hard to recommend the Rio.
In such a competitive segment full of budget rivals, this car – which is now over five years old – is simply not as good as more modern rivals which offer more equipment, better build quality and a superior drive for much the same price.
Share this on TwitterShare this on FacebookEmail