We drive Kia's Fiesta rival on Korean roads. Can it continue the firm's meteoric rise? 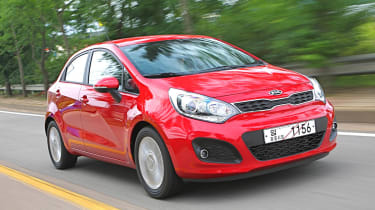 As Kia’s star has risen over the past couple of years, the Rio has looked a little outdated, but its shortcomings have been addressed with the all-new car and it is now a genuine contender. More spacious, more refined, superior to drive and markedly better quality than its predecessor, it thoroughly deserves to be on the radar of supermini buyers. It seems certain to deliver on Kia’s intention of claiming a bigger slice of the supermini sector. The move upmarket, however, comes at a price, with the model likely to start at £10,500 in the UK - £2,000 more expensive than at present. Top-spec versions could even reach £15,000. It still represents better value than most rivals, though.

Few companies have enjoyed such an amazing upward trajectory in recent times as Kia, and the next car charged with driving that momentum spectacularly forward is the new Rio.

With the supermini sector among the most fiercely fought in the market – and taking up more than a quarter of all sales in Europe – the Rio faces a formidable task. But expectations are high.

Auto Express tried out an early production model on the roads around Seoul in Kia’s home market, South Korea, to see if the established class leaders have a fresh contender to worry about – and if the company’s bullish hopes of massively increased sales are warranted.

First impressions are positive, as the Rio is undeniably a smart design. As with the Cee’d hatch before it, the Rio has been penned with European tastes in mind, and looks all the better for it.

Sculpted flanks, the firm’s now familiar bow-tie grille and a neatly rounded profile create a classy look which is a significant step forward from its rather bland predecessor. Both five-door and three-door models will be available, with the former arriving first in September.

The good work continues inside. The basic feel of the outgoing model is gone, replaced by a significantly better quality cabin constructed from decent materials.

The layout will be familiar to owners of recent Kias, with a three-cylinder instrument cluster, but there are new toggle switches on the centre console, inspired, apparently by Lamborghini, while a choice of three interior trim colours - brown, black or grey -confirms the move upmarket. Only the plastic door handles, which do not feel especially robust, are a disappointment.

There’s easily enough room for four adults to sit in comfort, with adequate headroom and legroom for six-footers in the rear, and the boot increases in size, too, to a competitive 288 litres.

The smaller 74bhp stop-start diesel has grabbed most of the headlines pre-launch, with CO2 emissions figures of 85g/km in EcoDynamics guise – the lowest of any production car on sale – and a claimed 88mpg. But features such as air-con, rear audio speakers and rear wash wipers are all absent to keep weight down, and Kia admits these may be compromises some buyers are unwilling to make, with the 1.1 engine likely to account for less than 10 per cent of sales.

Set to be more popular is the 89bhp 1.4-litre diesel, which is the version we drove, and it unquestionably moves the game on from the outgoing car. Admittedly, it’s not the torquiest of engines, and the unit needs to be worked hard at motorway speeds. However, the six-speed gearbox shifts solidly, while the Rio handles competently, resisting roll well.

It’s not a match for the class-leading Ford Fiesta dynamically and dead steering is an undoubted irritation, but in this class that is unlikely to be a deal-breaker for buyers. In short, with excellent refinement, it feels far more of a premium car from behind the wheel, one of Kia’s stated aims, so in that respect it’s a success.

We also tried the 109bhp 1.4-litre petrol version, which is a bit more lively and again a major step forward from its predecessor.

Low rolling resistance tyres fitted as part of the EcoDynamic tweaks made the ride harsher, though, and buyers will have to weigh up if they sufficiently value the fuel economy saving that the green package offers to opt for this version. The ISG stop-start system works effectively, though.

There are no quibbles in terms of equipment. As part of the drive upmarket, the Rio is available with the likes of aux-in and USB inputs, heated seats linked to the climate control, sat-nav with rear view and a heated steering wheel.

The package is, unquestionably, an appealing one, and should guarantee the Rio becomes a more familiar sight on British roads, ensuring the Kia success story continues apace.