Want a car with Soul? Then Kia's clever new supermini could be the answer! 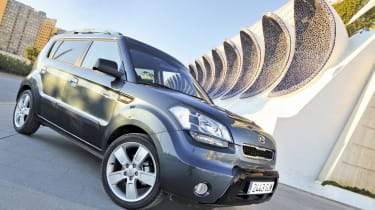 The Soul certainly has plenty going for it. As well as being original, it’s fun and drives well. And if you’re willing to pay the extra £2,500 for the full range of cosmetic options, you can turn an unusual people carrier into a cheeky head-turner. It is worth getting the diesel, though, as the petrol’s performance doesn’t match the Kia’s funky-looking exterior.

With the style and practicality of a supermini, plus the space of an SUV, Kia’s trendy ‘urban crossover’ aims to bring new buyers to the brand.

Having made its debut as a concept at the Detroit Motor Show in 2006, the production version retains most of the defining features that made the show star so popular.

First and foremost is the boxy shape, which was accentuated on our model by 18-inch alloys filling the flared arches. But that’s just the start, as Kia is keen to highlight the degree of customisation on offer.

The company clearly hopes to emulate the popularity of other small cars that are easy to personalise, such as the MINI and Fiat 500, with 11 paint finishes, four fabric and interior options and a range of decals all available.

On all versions, a narrow grille is framed by large headlights, and sharp creases lie along the flanks. At the rear, the lights are set vertically. The high driving position offers great visibility and the central console controls – which include iPod and USB links – are simply laid out.

The high roof ensures there is plenty of room for all occupants, although the combination of a short rear overhang and spacious cabin means the 222-litre boot can only really take the weekly shop.

Powered by a 1.6-litre petrol engine, which lacks punch in the mid-range, our test car struggled to deliver much pace. In contrast, the 1.6 diesel was faster and more fun to drive.

The Soul rides well, though, despite its stiff suspension, and has plenty of grip. The steering is light and precise, and the ride smooth and comfortable, both on bumpy roads and motorways.

It all adds up to a package that will make the Soul a serious contender.