Our fitness fan can’t keep up! Supermini-MPV is in fantastic shape, barely breaking into a sweat as it piles on the miles... 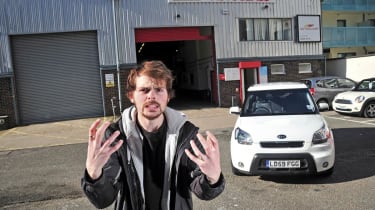 Sticking to New Year’s resolutions is always tough. When Big Ben chimed in 2010, I made it my goal to exercise and stay in shape, but three months into the year, my plans have gone awry. A recent move to Bournemouth means early starts, late finishes and no chance to slip on my trainers and go for a run – and our long-term Kia Soul has been getting a work-out instead.

My regular trips from the south coast to Auto Express’s London office mean the Korean machine has been piling on the miles faster than I’ve been putting on the pounds! As a result, I’m spending a lot of time with the Soul, which is no bad thing.

One area where the Kia really scores is in its long-distance refinement. The punchy 126bhp 1.6-litre diesel engine is smooth and torquey, while the long fifth gear helps to minimise noise on the motorway. Comfortable front seats help guard against aches and pains, and the raised suspension and high-set driving position give a commanding view of the road. Better still, the standard-fit iPod cable allows me to control my music through the powerful stereo. Away from the motorways and dual carriageways, the Soul is proving to be equally capable.

Well weighted steering, compact dimensions and decent grip levels mean the Kia feels remarkably agile. However, there’s plenty of body roll in corners, even when you’re turning sedately. It’s not a problem when driving on your own, but passengers tend to think you’re practising your racing technique at every opportunity.

My only real complaint is reserved for the upright windscreen. While it’s great for visibility, it seems to attract stone chips easily – a problem which has been made worse by the pot-holed state of the roads after the recent cold snap. Earlier this month, the glass was cracked by some debris on the M3.

A trip to Autoglass in Camden, north London, confirmed that a replacement was necessary, but the site didn’t have one in stock.

A few days later, a fresh screen was swiftly installed, only for the near-vertical glass to be damaged by another stone on my way to an assignment the following week!

Fortunately, that’s about it for negatives. Overall, the Soul has impressed me with its grown-up character and comfort. I’m also a firm fan of its unconventional looks. It’s just a shame I can’t reward its hard graft by giving it a relaxing rest while I hit the gym. There’s always next year, I suppose...

“I’m a big fan of the Soul’s styling. High-spec models can look a bit lairy with their body decals and huge alloy rims, but I think our mid-range 2 version is perfectly judged. Plain white paintwork suits the Kia, too.”