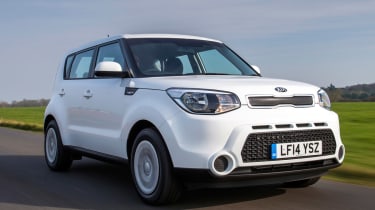 With the right engine the new Kia Soul is a sensible and logical choice. It’s more practical, better to drive and more refined than the outgoing model, although it’s edgy styling may not be to everyone’s taste. The only benefit of opting for the petrol engine is the four figure saving you’ll make in the purchase price over diesel model, but significantly increased running costs will quickly eat into that.

The Kia Soul helped change people’s perception of the brand when it was launched back in 2008. A little larger than a supermini, it combined MPV practicality with SUV styling but the crossover never really hit it off with UK buyers. However, Kia has made a raft of changes to this second-generation model in the hope of making it a hit second time around.

The new Soul retains its unique shape while adopting several styling cues from the Track’ster concept first revealed at the Chicago Motor Show last year. Beneath the surface the second-generation Soul rides on the same platform as the larger Kia Cee'd, so it’s longer, wider and stiffer than the outgoing model. 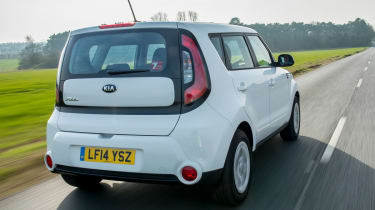 Significant suspension and steering upgrades should also go some way in to making it more refined and sophisticated to drive. We’ve already driven the 1.6-litre diesel model on Italian roads but how will the crossover fare on bumpy British tarmac?

The model driven here is the lighter, cheaper and more powerful 130bhp 1.6-litre direct injection petrol version. Unlike its rivals, Kia hasn’t chosen to go down the turbocharged path, so as hushed and refined as the four-cylinder petrol engine is, the 4bhp advantage over the diesel isn’t enough.

The real problem is a lack of torque - 161Nm is 99Nm short of what the diesel offers. It may be 0.2 seconds quicker from 0-62mph but you wouldn’t think it, as maximum torque isn’t available until 6,300rpm. Although the six-speed manual gearbox is slick to use, you have to work the ratios hard to eke out all of the power available.

Kia admits the diesel model will make up the bulk of UK sales, as claimed economy of 41.5mpg and emissions of 158g/km for the petrol variant falls short of its efficient rivals from the likes of Renault and Nissan. If you spec one of the more premium Mixx or Maxx trim levels, which will both arrive later in the year, those figures fall further to 38.7mpg and 170g/km.

Being a boxy crossover means the Soul is never going to be a thriller on twister roads. Body roll is noticeable but the increased width and rigidity of the new model provides better road holding, while the new suspension setup delivers a more supple ride.

Kia will fit its Flex Steer variable power-assisted steering system as standard on every model. Three modes including comfort, normal and sport all vary the weight of the steering to suit particular driving needs, but while you can feel the system working it provides little in the way of feel or feedback. 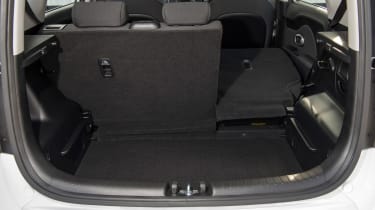 Dynamically, the Soul may be a yard or two behind its rivals but on a quality and practical level it’s more than a match. Even on the entry-level ‘Start’ spec of our test car, extended use of soft-touch materials and a generous amount of kit including air conditioning, steering wheel mounted controls and DAB radio impressed.

Being 20mm longer and 15mm wider, with a wheelbase increase of 20mm over its predecessor, means easy access and more passenger space inside. The flat floor in the rear also means there’s enough space for three adults in the back if you need it, while there’s more headroom than any of the Soul’s rivals can offer. A 354-litre boot may not be the biggest but a wider tailgate opening means it’s easier to use all of the space available.

Kia’s new crossover arrives at a time when the B-segment SUV market is booming, with sales for this type of vehicle in Western Europe expected to rise from around 380,000 in 2013 to more than 600,000 by 2015. The Korean carmaker is sure to get a good slice of the action with a more grownup car that retains the edgy attraction of the original, but you can’t help think a more efficient and cleaner engine range would boost its appeal significantly.