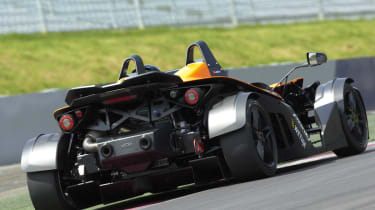 KTM made its name building sports bikes, but has managed to translate the thrill of two wheels to four. The X-Bow R is a much improved version of the 2008 original. Faster, nimbler and more exciting to drive, it’s a great toy for a track day enthusiast who wants to drive on the road, too. It’s not cheap, but the fact that it only costs around £7,000 more than the standard 238bhp car makes it the better choice.

The company’s slogan is ‘Ready to Race’, and never has this been more appropriate than with KTM’s new X-Bow R – the most powerful edition to date of the Austrian manufacturer’s Ariel Atom rival. We drove the car on the brand-new Red Bull Ring racetrack in Spielberg, Austria.
Thanks to a larger turbo and an uprated fuel-injection system, power from the Audi S3-sourced 2.0-litre petrol engine has been boosted to 300bhp – an increase of 25 per cent.
To improve stiffness, the unit is mounted directly to the carbon-fibre monocoque chassis, not the rear subframe as with the standard car. The R also sits 19mm lower, dropping the centre of gravity by 15mm.

Other features include stiffer springs and dampers, a limited-slip differential and orange and white paintwork. But it’s as much about what the car doesn’t have as what it does. No traction control, ESP or creature comforts mean it’s all about going fast.
On its natural habitat of the track, it doesn’t take long to work out that this is a racing car at heart. The slightest twitch of the steering wheel sends the car spearing towards another apex, an attribute that’s helped by its lightness. With so much power, so little weight (790kg) and no electronic aids, you need to be wary of flooring the throttle too early in a bend and spinning up the rears. But once you find the limit of the car’s grip, its balance and steering feel are incredible.
You soon learn that with an engine as smooth and torquey as this four-cylinder Audi unit, the trick is to use a higher gear than you think. This allows the car to be just as fast, but less nervous,
in corners. When you do hit the limiter, though, a red flashing light on the central display alerts you via your peripheral vision that it’s time for the next ratio.
Our only real criticisms are the lack of noise and the price tag. Standing trackside, the X-Bow roars down the straight and screeches around corners, but from the driving seat, it’s lacking in aural drama.
The scope for upgrading your X-Bow R is huge, with a range of official aerodynamic and performance add-ons available. There’s even a Europe-wide one-make racing series you can sign up to – with 30 cars currently on the grid. The best part? You can drive your X-Bow home once the racing’s done.
Share this on TwitterShare this on FacebookEmail