The Lamborghini was the most expensive car on test. Luckily the super-light Gallardo was also the most rewarding to drive 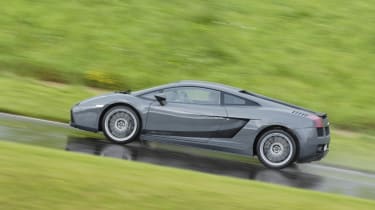 Carbon fibre is light, strong and very expensive. It’s what Formula One cars are made of – along with much of the new Gallardo.

Superleggera means ‘super-light’, and the Lamborghini has shed 100kg. Carbon fibre has been used to construct the door mirrors, rear wing and much of the cabin.

Last year, the standard model finished ahead of a Porsche 911 Turbo in the final ranking – and here, the two firms went head-to-head in super-sport spec.

As road cars, both are flawed; they’re stiff and noisy with minimal ground clearance and savage responses. The Gallardo is more comfortable, although the modest headroom and slim seats won’t suit all tastes. But anyone can appreciate the start-up procedure. Fasten the four-point harness, turn the key and the starter motor whirrs frantically for a second before the V10 bellows into life. More powerful than ever and mated to the E-gear sequential gearbox as standard, this engine makes the six-cylinder in the 911 GT3 RS feel almost weedy.

On the move, it was raw and mechanical. We heard the front diff working through tight corners, and each pull of a paddleshifter was followed by a clank from the gearbox. It matched the Porsche’s phenomenal lateral grip, and was equally honed and responsive. Sadly, we couldn’t time a lap, but suspect this would have been the quickest.

The suspension wasn’t quite as controlled as the 911’s and the brakes offered less feel – yet in every other way, the Superleggera blew us away. It demands respect and concentration, but is easily the most rewarding car here, despite carrying a £25,000 premium over the standard variant.

(Editor's note: unfortunately the Lamborghini didn't make it to the video session, so the video you see here is the closest thing we could think of - an in-car ride around the Anglesey circuit from the cockpit of the Porsche Cayman S)