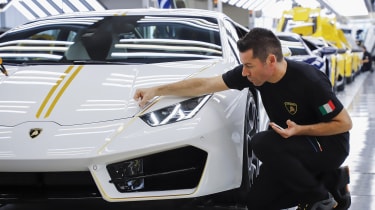 Pope Francis has taken delivery of a one-off special edition of the Lamborghini Huracan supercar, but His Holiness won’t be keeping it for long as he is set to auction it off for charity next year.

Lamborghini’s in-house customisation department Ad Personam commissioned the one-off rear-wheel-drive Huracan, which sports a special white paint scheme with golden stripes that replicates both the flag of the Vatican City and the Pope’s vestments.

The ceremonial hand over was held in the Vatican, with Lamborghini CEO Stefano Domenicali in attendance to witness the Italian marque gain a new customer, and arguably its most prestigious to date. The pontiff marked the special occasion by putting his signature on the front bonnet of the Huracan and blessing it. 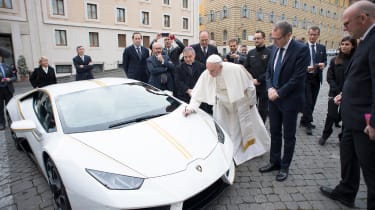 Pope Francis announced during the presentation that the Huracan will be auctioned by RM Sotheby’s on 12 May 2018 and that proceeds will go to various Catholic charities, such as the Pope John XXIII Community, GICAM and Friends of Central Africa.

Proceeds will also go to aid the Christian community of the Nineveh Plains in Iraq, where clashes between the Iraqi Army and the Kurdish Peshmerga forces have resulted in thousands of Christians being displaced.

Would like to see the Pope driving the 602bhp Lamborghini Huracan? Let us know below...