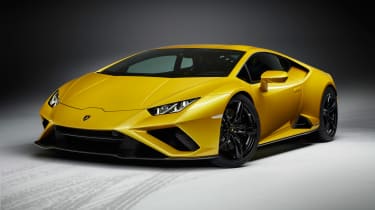 Sometimes less is more and Lamborghini is hoping the maxim holds true in the case of the latest addition to its Huracan EVO range. The new Lamborghini Huracan EVO Rear-Wheel-Drive joins the line-up with two fewer driven wheels than the existing Coupe and Spyder convertible models, and prices starting from £137,000 before tax.

This isn’t the first time Lamborghini has switched from all-wheel drive to rear-wheel drive for a special version of its entry-level road-going supercar. The original Huracan was offered in RWD form and before it, the 2009 Gallardo LP 550-2 re-established the trend for sending power rearwards that had been ignored since the last RWD Diablos were sold a decade earlier. Like its predecessors, we’re told that the focus of the Lamborghini Huracan EVO Rear-Wheel-Drive is on pure driver engagement rather than the dirty business of straight-line performance and lap times.

The Lamborghini Huracan EVO Rear-Wheel-Drive uses the same mid-mounted V10 engine as the all-wheel-drive Huracan EVO but the unit produces a slightly lower 610bhp maximum at 8,000rpm - 20bhp down on the standard car. Torque dips too, from 600Nm and 560Nm at 6,500rpm. However, while the standard Huracan EVO weighs 1,422kg without fluids on board, the switch to rear-wheel drive brings the new car in at 1,389kg. 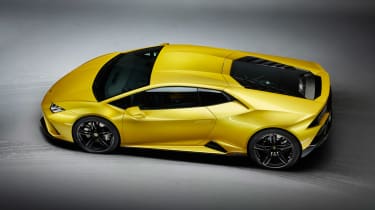 The weight reduction on the RWD Huracan can’t quite overcome the traction advantage of the 4WD model, as a 0-62mph time of 3.3s compared to 2.9s for the existing car demonstrates. But both versions record the same 202mph top speed and the Santa Agata development team hope that the 33kg weight saving will tell through the corners.

In the name of delivering the most involving driving experience you can get in a Huracan EVO, the RWD model does without the high tech four-wheel steering and four-wheel torque vectoring system os the standard car. What it does get is a specially calibrated version of Lamborghini’s P-TCS (Performance Traction Control System) that is designed to keep the torque flowing even when the car is pulling out of slides. The system offers the familiar Strada, Sport and Corsa driving modes via the ANIMA control on the steering wheel, each offering progressively more oversteer-friendly set-ups. 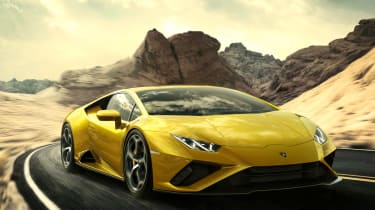 The Lamborghini Huracan EVO Rear-Wheel-Drive is also on the receiving end of some minor design tweaks to mark it out from the 4WD coupe. There’s a new splitter at the front and vertical fins appear in the large air-intakes. The rear bumper is finished in gloss black and the diffuser below has a design unique to the RWD model. Buyers stumping up the £137,000 asking price can also opt to have their car finished in the new Giallo Belenus yellow pain that’s been developed especially for the launch of the car with a matching leather and Alcantara cabin.

Now check out our review of the 4WD Lamborghini Huracan EVO here...