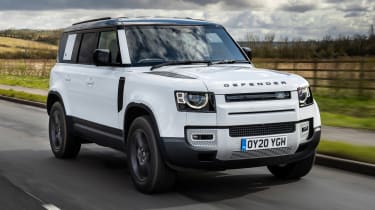 Petrol or diesel? Difficult decision. On this short experience of the new P400 with its mild-hybrid tech, it ups the fun level even further – and the diesel is already very enjoyable. Most people will be tempted by the extra economy and lower prices of the diesel models, especially given the huge cost of the P400 Defender X. They’d be making the right decision, although this car shows the promise that an even hotter Defender might just offer in the future.

Our first drive of the long-awaited new Land Rover Defender didn’t disappoint – it resulted in a full five- star rating. What surprised us most was how much fun the car was to drive – and that was the diesel-engined model. So how does the Defender do with petrol power under its square bonnet?

Until Jaguar Land Rover’s Special Vehicle Operations division gets their hands on the Defender, this P400 model is as fast as the new car will get. It’s also as electrified as the Defender gets, too, at least until plug-in hybrid versions eventually arrive. This all-new six-cylinder petrol engine gets mild-hybrid tech to boost response, power and efficiency – slightly.

With a 3.0-litre twin-scroll turbo, plus a 48-volt electric supercharger with a belt-integrated starter motor in place of the alternator, power tops out at 395bhp with a tasty 550Nm of torque. That equates to a 0-60mph time of 6.1 seconds. 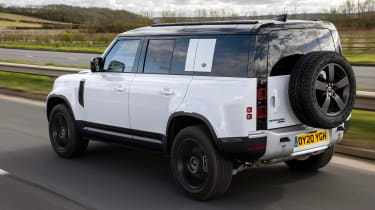 The on-board 48-volt lithium-ion battery feeds the whole electrical system and gets topped up as the car slows down, while also helping to reduce fuel consumption; the P400’s best claimed average of 25.2mpg isn’t too far off the diesel’s 31.7mpg.

It’s more fun to drive, too. The throttle response is noticeably sharper – helped by the mild-hybrid system – which makes the Land Rover feel even more lively, while acceleration is accompanied by a tuneful note from the six-cylinder engine.

There are no gearchange paddles behind the steering wheel – a deliberate decision by the engineering team that didn’t feel it was in keeping with the Defender spirit. However, the stubby gearlever can be used to manually shift through the ZF auto box’s eight ratios. Left to its own devices, changes are barely noticeable save for the slight shift in tone of the engine note.

The tighter responses of the petrol engine make the Defender feel even more alert on the road. The monocoque body is incredibly stiff, enabling engineers to tune the car-like double-wishbone front and integral link rear suspension for a rare combination – for such a 4x4 – of off and on-road ability. 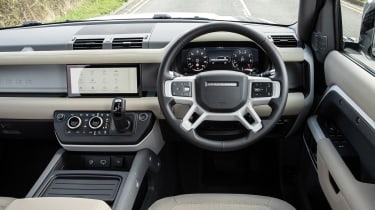 Air suspension is standard, as are Adaptive Dynamics, which combine to not only raise the car for extreme off-roading and lower it for easier access, but also react super-swiftly when driving on tarmac.

That means that this near two-metre-tall SUV handles more like a car than a 4x4; it stays largely flat and unflustered when cornering. The ride is pretty much unchanged from the diesel version – communicative rather than uncomfortable – while levels of grip are impressively high. The steering is surprisingly reactive; again, unusual for a 4x4.

The only other downside to the P400 model is that, currently at least, it’s only available as a top-spec Defender X, although the car in our pictures is in SE trim. It has pretty much every option box ticked and all for a sizeable £79,655. That’s nearly £35,000 more than the Defender 110’s starting price and only a few thousand less than the cheapest Range Rover.