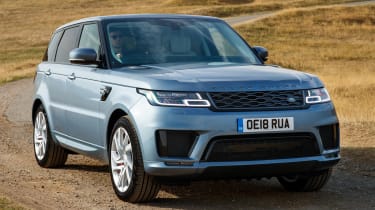 The Range Rover Sport’s P400e powertrain is beautifully befitting of the brand – nothing screams luxury like the sound of silence, after all. If a plug-in hybrid works for you financially, we’ve few reasons not to recommend one. But make sure you do the sums, as the excellent diesel is still a fantastically capable all-rounder.

Jaguar Land Rover’s push towards an electrified future is in full swing. The I-Pace is an undisputed EV champion – our current Car of the Year, no less – and the firm has already been spied testing CO2-reducing mild-hybrid tech for its next-generation saloons and SUVs.

It is also forging ahead with plug-in hybrid technology: both the full-fat Range Rover and the smaller Range Rover Sport are now available in P400e guise. Matching a four-cylinder petrol engine with a powerful electric motor, each is capable of up to 31 miles on electric power alone.

We first drove the Sport PHEV in Los Angeles earlier this year, and came away impressed by its mix of luxury, refinement and agility. But California’s pancake-smooth tarmac is a world away from the UK’s rutted roads – so what’s it like to drive back in Blighty? 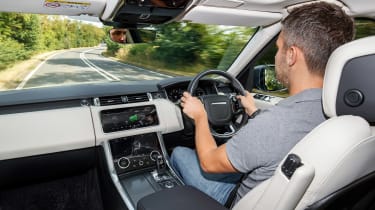 Well, suffice to say – at low speeds, at least – the plug-in powertrain is a perfect fit. The effortless process of pulling away in EV mode is everything you expect from a Range Rover and more, building on the level of luxury so often associated with the famous nameplate. There’s just enough zip for it to feel quick around town; gliding effortlessly between traffic lights before allowing you to park in complete silence.

But, as in other EVs and PHEVs, that silence only emphasises the unavoidable background noises – many of which wouldn’t be noticeable in a petrol or diesel car. Luckily, build quality is first rate, so squeaks and rattles are few and far between, and even on huge 22-inch wheels the P400e remains almost completely quiet at motorway speeds.

It’s comfortable, too. While it can’t match the faultless ride quality of its bigger brother, the Range Rover Sport P400e smooths all but the worst bumps to the point that they’re almost imperceptible. Go for those optional wheels and you will detect the occasional knock in the cabin, but on the whole it’s supremely well damped.

The PHEV isn’t without its compromises, however. Of course, if you regularly drive more than 30 miles in a single hit you’ll depend heavily on the petrol engine. While it won’t throw in the towel if you decide to up the pace, it’s not the most tuneful unit. Hauling around almost 2.5 tonnes has its efficiency issues, too – run the batteries down and you’ll be lucky to hit 30mpg. Those covering big miles will be better suited to the excellent SDV6 diesel model.

Another problem is the way this Range Rover continually hesitates when pulling away from rolling junctions and roundabouts; ask for a sudden burst of acceleration and the P400e will pause, before ungracefully hurling you towards the horizon. That initial lack of response can be incredibly frustrating.

But when you’re up and running, the hybrid Range Rover Sport gives little away to its conventionally powered cousins. It changes direction sharply, and shifts up and down its eight-speed ZF auto box without fuss. The power is there when you want it, too. 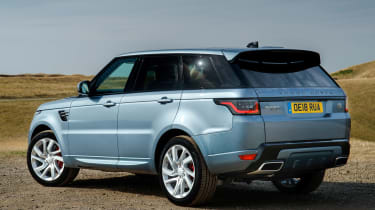 Of course, everything else is just as you’d expect it. The cabin is beautiful, and the updated MY18 infotainment package is miles better than before. There’s still no Apple CarPlay or Android Auto, but the dual screen set-up is responsive and packed with features. It is prone to fingerprints, however.

Space in the back is excellent. The commanding view of the road extends to those in the rear, who are treated to all the same high-quality materials as those riding up front. PHEV buyers aren’t offered the third row of seats available elsewhere in the Sport range, but that shouldn’t put you off; the sixth and seventh seats were only ever reserved for very small children at best.

Costing around £4,500 more than the V6 diesel and an extra £8,000 over the four-cylinder non-hybrid petrol, you’ll need to work out whether the Range Rover Sport PHEV will work for you financially. Those looking to run the P400e as a company car will benefit the most, with significantly reduced Benefit in Kind tax: the diesel sits in the very highest bracket whereas the hybrid achieves a lowly 16 per cent rating.