Plug-in hybrid power boosts the new 2018 model year Range Rover Sport, but what's it like to drive? We find out... 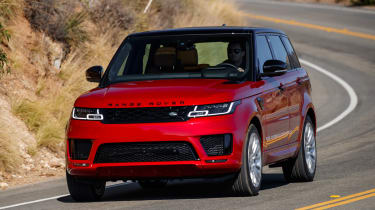 Range Rover’s first steps into electrification are good ones – but with the usual plug-in caveats. If you mainly drive long distances, a plug-in hybrid probably isn’t for you. But if you’re a town dweller who’ll charge up regularly, you’ll reap the rewards of the Range Rover Sport – still a mighty fine SUV – and plug-in power. Meanwhile the 18 Model Year updates make one of the most desirable big SUVs even more so.

2018 is set to see more electric cars launched than ever before and Land Rover won’t be missing out as it launches plug-in versions of the Range Rover and this, the new 2018 model year Range Rover Sport PHEV.

Like it’s bigger brother, the Sport will wear a P400e badge on its back, denoting the mix of petrol and electric power, and the power output – in this case just a shade under 400bhp.

That output comes from a combination of a 296bhp 2.0-litre four-cylinder engine (available on its own in the Si4 model) plus an 85kW electric motor. The electric boost only knocks 0.7 seconds off the Si4’s 0-60mph time, but the claimed economy figures shoot up from 30.7mpg to 101mpg. Of course, it’ll be nowhere near that when we get to test the car in real-world conditions in the UK, but what is set in stone is the 64g/km CO2 figure with associated company car tax savings. 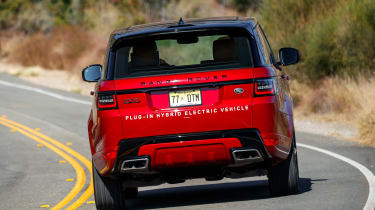 For our test, we were on a mix of traffic clogged and slightly freer-flowing Californian streets with some mild off-road tracks thrown in for good measure. Like the Range Rover, the Sport works well around town where it will accelerate quickly and quietly on electric power – Land Rover claims an EV range of 31 miles, but we’d say that would be closer to the mid-twenties in every day use. And charging time for the battery ranges from 2 hours 45 minutes with a fast charger to seven and a half hours with a 10 amp home charger.

We took advantage of the save mode in the hybrid system to see how an EV copes off road (and the answer is rather well, with excellent power control), but when you’re saving battery power or have run out, you’ll have to rely on the four-cylinder engine – and that’s where the Sport isn’t at its best.

The extra weight of the plug-in system means the engine has to work harder than it would otherwise when it isn’t getting an EV boost – and it’s not the most refined unit. So if you floor the throttle and ask for maximum power from both power sources (this is the Range Rover Sport, after all), then the whine of the engine is slightly at odds with the sporting luxury of the car you’re sitting in.

The P400e Sport still offers a good blend of ride comfort and decent agility for a large SUV, while the 18 Model Year tweaks have softened the looks outside (although it takes a good hard stare to realise) and added new LED headlights. 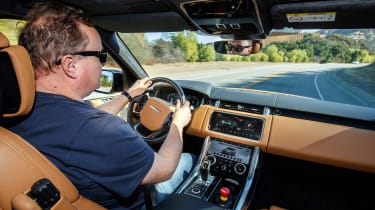 Inside, the Sport is as attractive and spacious as ever, with the addition of the twin-screen Touch Pro Duo infotainment system that looks great, but is still behind rivals on smartphone connectivity.

If you love your tech, though, you’ll spend hours opening and closing the sunblind on the panoramic roof just by waving your hand back and forth in front of the rear-view mirror.

Price-wise, compared with the rest of the range, a plug-in hybrid Range Rover Sport costs between £5,655 and £1,455 more than an equivalent 3.0-litre V6 diesel, depending on spec. Given the on-paper performance, economy and potential tax benefits, that looks like a steal. But it only really works if you use electric power lots – if you do plenty of miles and when real-world economy is taken into account, a diesel may still suit you better.