We drive a prototype of the new Range Rover Sport, ahead of its arrival on UK roads this autumn 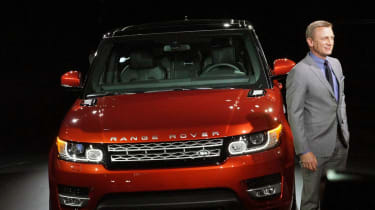 It’s still early days yet, but this prototype reveals an impressive breadth of abilities in the new Range Rover Sport. Land Rover has done a great job of making it feel genuinely sporty, and the excellent engines and ride comfort also ensure that it has all the luxurious qualities you’re expecting of a Range Rover. With a list price that undercuts its bigger brother by around £20,000, the Sport looks like great value, too, especially when you consider you can have it with seven seats.

The new Range Rover Sport may share a platform and part of its name with the latest Range Rover, but this is a car that is promising something entirely different. Land Rover has said that the Sport is built from 75 per cent bespoke parts, in an effort to make this “the fastest, most agile, most responsive Land Rover ever”. Whether it is or not is a question we now have our best shot of answering, having been behind the wheel of a prototype at Land Rover’s Gaydon test facility.

Our Sport was powered by the SDV6 engine, which means you get 288bhp, 600Nm of torque and acceleration from 0-60mph in 6.8 seconds – that’s 2.1 seconds quicker than the outgoing SDV6 Sport. And the good news is this engine is even more refined than before, revving smoothly and quietly at all times.

Buyers can also choose a 254bhp TDV6, a 334bhp SDV8 or a 503bhp 5.0-litre supercharged V8. Having only driven the SDV6, it’s difficult to say for certain but it could well be the pick of the range. It pulls quickly from the off, and accelerated up to 130mph on Gaydon’s test track with little trouble. What’s more, Land Rover says fuel economy will be around 37mpg and CO2 emissions are improved by 13 per cent over the outgoing car, at 199g/km.

The huge improvements in performance and emissions are the result of a new aluminium body and platform, first developed for the latest Range Rover. It saves 420kg compared with the outgoing car, and that also has a great effect on the Sport’s dynamic abilities.

On our tight and twisty test route the Sport feels immediately at home, despite its size. The cabin wraps around the driver a little more than it does in the Range Rover, the steering wheel is smaller and the rack is quicker. As a result it feels a lot more like a sports car, and it even handles a lot more like one, too. Quick direction changes can’t unsettle the Sport, and it grips hard while exhibiting a surprising lack of body roll. Engineers say – as only engineers can – that handling is 30 per cent better than the old model, and that figure sounds about right.

Active Roll Control and torque vectoring help keep it going where you want it to go, and you can feel the Sport tightening its line around a particularly sharp bend as it brakes the inside wheels and directs power to the outside.

Land Rover wanted the Sport to be able to cover long distances in comfort, and while the ride is noticeably firmer than the Range Rover’s, it still works as a very luxurious motorway cruiser. Thumps and bumps make their way in to the cabin more readily, but ride comfort is still excellent. As is the refinement, which is characterised but very little wind noise, next-to-no wind noise and as little tyre noise as you can find in this class.

Off-roading is still very important, despite this being the Sport model, so it gets the latest Terrain Response system, ground clearance increased by 52mm, improved approach and departure angles and a new wading sensor system that can tell you if you’re OK to drive through deep water. With a wading depth of 850mm, chances are you will be.

We didn’t have a chance to test the new Sport off-road but the engineering team says it’s the best in class, and if the new Range Rover is anything to go by we’re expecting it to be very impressive.

Prices for the new Range Rover Sport start at £51,500, which looks like great value next to the £71,295 Range Rover. The interior feels just as luxurious, with little extra sporty touches like the stubby gearlever. With an extra 178mm in the wheelbase, there’s a huge amount of room in the back seats, and even the option of two temporary seats that rise electronically out of the boot floor.

It’ll be good to get a proper on-road drive of the Range Rover Sport before making any concrete assertions, but the early signs are that Land Rover has set the bar incredibly high for the next set of sporty SUVs.