Not so good vibrations on the Range Rover Sport 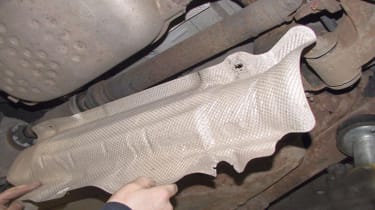 Vibration heard or felt inside the cab is usually caused by an imbalance of a rotating mass. That pins the source down to wheels and tyres, and the front and rear propshaft. Of course, the axles and differential components are also rotating, as are the components of the gearbox and transfer box, but we wouldn’t normally expect these to cause vibration in any normal state of wear, and it takes physical damage to put an axle shaft out of balance.

Before investigating any vibration that appears to be generally within the vehicle body or underside, it’s worth checking the wheels and tyres for damage, lost balance weights, flat spots on the tyres if the vehicle has been parked up for a few days, and unusual tread wear. Tread wear problems suggest worn suspension bushes and/or incorrect wheel alignment.

Here, we are dealing with the most common cause of vibration, which is propshaft imbalance associated with the centre support bearing in the middle of the split rear propshaft. It is fitted to the Discovery 3 and 4, Range Rover L322 and, as illustrated here, Range Rover Sport 1.

The bearing may initially cause a faint rumble or rough metallic sound heard from the rear underside. It can occur at any speed and load, but is usually heard at low speed when there is little other noise to mask it, and at low load when the worn bearing is freer to move and vibrate. It’s worth changing the bearing at this early stage before it causes further damage. 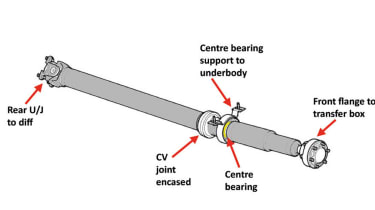 Design of the time

The rear propshaft, as we said, comprises two sections. The front half is bolted to the transfer box output flange and the rear end bolted to the rear differential flange. They are supported in the middle by the centre bearing whose support frame is bolted to the vehicle floorpan. The centre bearing actually holds the rear end of the front half of the prop. The splined rear end of the front half locates into a splined CV joint at the front of the rear half, providing that half with both drive and support. The CV joint (housed in a casing crimped around the rear shaft) allows the angle between the two propshaft halves to vary slightly without affecting their rotational speeds.

In the vehicle shown here, the first warning of a propshaft problem was a buffeting vibration at between 67 and 70mph. That’s quite a narrow speed band but the effect was very noticeable and quite odd. It was similar to the sound you hear when driving at speed with a rear window open as the air vibrates the inside of the body shell, only in this case it happened with all the windows shut. The noise seemed to be coming from under the rear passenger footwell, so the rear propshaft was the prime suspect. 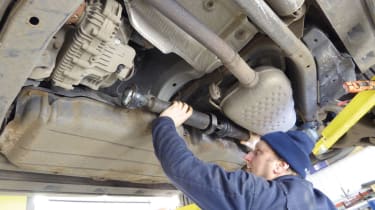 A quick visual check underneath revealed nothing obvious, though only the front joint of the rear propshaft is visible. We also looked for other issues that might be causing the vibration, or perhaps it was caused by air buffeting. In that respect we noticed the protective cowl mounted under the vehicle, just ahead of the spare wheel, was loose at one side and possibly vibrating in the draft. We replaced the missing bolt, but that wasn’t the cause. Once the heat shield was removed from the propshaft, we could inspect the centre joint. It felt intact, though we could see there was a split in the rubber support ring bonding it to its support bracket, which might be causing the vibration by allowing the shaft to whip during rotation. The rubber is an integral part of the centre bearing, so we opted to renew the centre bearing assembly, in preference to the normal and more expensive approach of renewing the complete shaft.

The centre bearing assembly is the most likely cause of noise and vibration. But the CV joint should also be checked while the shaft is apart, looking for surface pitting and physical damage, and feeling its movement, which should be smooth and unrestricted.

• You can grind a chisel to match the curvature of the propshaft’s circumference to use when peening the CV casing back into position.• Ensure the new bearing is fitted the correct way around, because removing it again will almost certainly damage it.

The CV joint on our propshaft seemed serviceable, so we opted to renew just the centre bearing assembly, which included the split rubber mounting. This cured a roughness underneath that had caused a rotating noise at slow speed, suggesting the old bearing was worn, in addition to its split mounting rubber causing the vibration felt in the cab. Interestingly, the centre bearing did not feel rough when turned by hand, which usually confirms wear in earlier bearing designs. Modern bearings can be noisy at higher speed, yet appear smooth when felt by hand.