With aggressive looks and supercar performance, the latest Lexus is ready to take on the BMW M3. 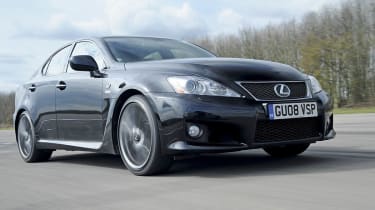 The IS F is an impressive addition to the super-saloon fraternity, featuring a clever gearbox and powerful engine that provides incredible pace. Exclusivity is also guaranteed, as only 150 cars are expected to arrive in the UK this year. Its glorious V8 sounds amazing, but its sledgehammer performance is hard to access on public roads. The Lexus also lacks the all-round talents of its European rivals. So while the IS F hits the bullseye as a technological tour de force, it isn’t good enough to topple the class leaders.

No luxury car range is complete with-out a super-saloon these days – so Lexus has come up with this. The IS F is the Japanese manufacturer’s answer to the BMW M3 and Mercedes C63 AMG. It lacks the heritage of its Euro­pean rivals, but can it match the old guard on UK roads?

Judged on looks alone, this version of the IS is a rather sober piece of kit. Lowered suspension and 19-inch alloys give a ground-hugging stance, yet the new front bumper, side sills and large bonnet bulge are surprisingly discreet.

Our model’s black paintwork also reduced the impact of the standard anthracite wheels, and on our drive no other road users paid the sporty Lexus any attention. The only details which spoil its Q-car credentials are the two pairs of stacked oval tailpipes that protrude from the back bumper.

It’s a similar story inside, because the cabin is pretty much unchanged from the standard IS 250. You do get loads of kit, including sat-nav, sports seats and a 14-speaker stereo, but the new silver trim on the centre console is somewhat underwhelming.

A quick look under the IS F’s bonnet should be enough to restore faith in the brand, because crammed into the engine bay is an incredible 5.0-litre V8. It develops a mouth-watering 417bhp and powers the sal­oon from 0-62mph in 4.8 seconds.

However, the car’s pure pace tells only half the story, because the high-revving unit is smooth, with a linear power delivery and pin-sharp respon­ses. It’s muted in normal driving, but once you pass 3,600rpm, a valve in the exhaust manifold opens and the volume instantly rises, creating a fantastic V8 soundtrack.

Enthusiasts won’t be as happy with the standard eight-speed paddleshift-operated automatic gearbox, though – this is the only transmission option avail­able. Changing ratios takes a fraction of a second, and in full manual mode the torque converter is locked in all but first gear, which provides the feel and speed of a clutchless manual – it even blips the throttle on downchanges. However, the auto transmission can’t match a conventional box for driver involvement.

With 505Nm of torque, the IS F is no slouch in a straight line – it has a top speed of 168mph. Yet any self-respecting performance saloon also needs to handle brilliantly. The Lexus’s stiffened suspension is fine at lower speeds, but once you increase the pace, it doesn’t provide the fluency of an M3 or Audi RS4. There is plenty of grip and feedback through the revised steering rack, although the newcomer simply doesn’t gel like its rivals and rides very harshly.

While it’s still fun to drive, most of that enjoyment comes from its mighty V8. And in this class, the IS F’s limited handling involvement won’t appeal to everyone – especially when you’re paying £51,000 for the privilege.

RIVAL: BMW M3 saloon The latest M3 also uses V8 power, but the German four-door is cheaper than the Lexus, at £49,415. It’s also a much more capable all-rounder, and is available in coupé and convertible bodystyles, too.