Does coupe-cabriolet finally add some fun to exec range? 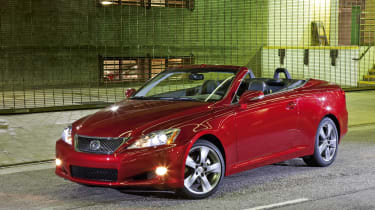 The new folding hard-top Lexus continues where the IS saloon left off. There are plenty of luxury features and it’s a capable enough car, but the manufacturer has ultimately failed to ignite the passion we would expect to find in a sporting convertible.

When it comes to building luxury cars, Lexus sets a standard for quality that few competitors can match. Yet the Japanese manufacturer has always had difficulty injecting vitality and passion into its models. Even the IS saloon feels a bit sterile compared to its German arch rival, the BMW 3-Series.

This fact has clearly not been lost on the maker, so Lexus is introducing the IS-C. It’s a hard-top convertible version of the saloon, and is claimed to address at a stroke criticism that there’s no coupé or convertible in the line-up.

Following hot on the heels of the high-performance IS-F, the IS-C offers much to get excited about – on paper, at least. There’s a choice of a 204bhp 2.5-litre V6 engine mated to a six-speed manual or automatic transmission, or a 306bhp 3.5 V6 which comes only with the auto.

Ignoring the folding top for a moment, and the features and options on the IS-C are the same as for the saloon, and the interior is virtually identical, too. The roof itself is an elegant hard-top design that folds neatly into the boot. However, it’s so large that you may want to skip packing a few things if you’re planning a top-down driving holiday.

With the roof up, the IS-C is commendably quiet at speed, thanks to the soundproofed glass and a slippery shape that achieves a drag coefficient of 0.29. Still, we can’t get quite as excited about this car as we would like. Acceleration is only mediocre at 8.4 seconds from 0-60mph for the 250C, and while the auto box works fine, the manual is vague and notchy.

The drop-top adds more than 130kg to the car’s weight, so it’s no surprise that the steering and handling feel somewhat muted, although the structure is pretty stiff.

Overall, the IS-C suffers from the same problem that has blighted the line-up from the very beginning. Although there are few faults, it’s simply not exciting. So the Lexus is exactly what we expected – but unfortunately less than we had hoped for.

Rival: BMW 325i Convertible Good looks, incredibly robust engineering and a fabulous engine make the 3-Series Convertible an excellent choice. Not only is it better to drive than the IS-C, it also benefits from a more convincing interior design.