Refreshed Audi A4 rivals goes on sale in January from £29,995, with new tech, a visual redesign and tweaked suspension 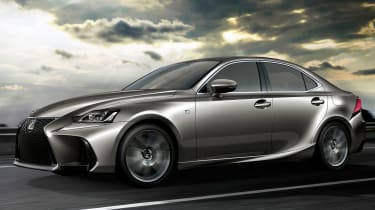 After Lexus revealed its refreshed IS at the 2016 Beijing Motor Show, UK pricing has now been revealed. The BMW 3 Series challenger goes on sale in January 2017, and starts from £29,995.

The 2017 IS embraces Lexus' family face as first seen on the latest RX, NX, RC and GS models. It's a sleeker look overall, with deep air intakes on the front, the now-familiar large spindle grille and reshaped headlights with L-shaped LED running lights. The rear lights are also reshaped with LEDs on all models, while there's extra chrome and F-Sport models gain sporty black detailing.

A new infotainment display screen is the main change inside the IS. The new 10.3-inch screen for the Premium navigation is bigger than before, and there are some changes to the user interface to make it a bit easier to use. There's also a redesigned instrument binnacle, a new wheel, and a set of cupholders. 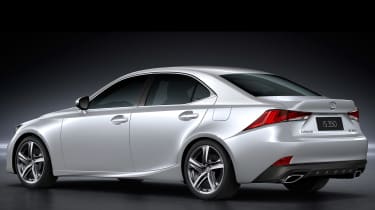 Lexus has revised the suspension all-round on the IS, too, with claims of better straight line stability and body control. The ride quality is said to be improved, too, while the electric power steering has new settings aimed at improving response and feedback.

Like the RC coupe, the IS will have two petrol engines, the 2.0-litre petrol in the 200t model and a 2.5-litre unit combined with an electric motor in the hybrid IS 300h model. These have 220bhp and 242bhp respectively. Of course, there's also the 470bhp RC F, so we could see a racy IS F model with the same V8 engine further down the line as well. 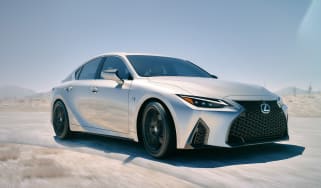