It's big, it's powerful, it's the new Lexus RX350. But, how economical will it's meaty V6 engine prove to be? 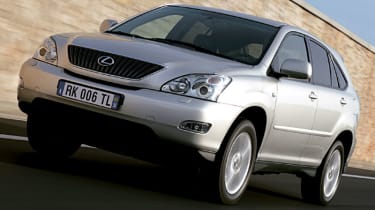 The Lexus RX350 is a far better buy than its predecessor, and is worth the additional £1,350. Yet while the new petrol engine is the best in its class, the rest of the car isn't. A lack of a diesel is an oversight, and while Lexus offers the more economical RX400h, it admits the hybrid draws more buyers with its new technology than its mpg.

Despite its refinement, performance and desirability, the Lexus RX has always lacked one key ingredient - a fuel-efficient diesel engine. So it seemed a little strange that when bosses announced plans for a new powerplant, it wasn't an oil-burner. Instead, the firm has introduced a 3.5-litre petrol V6 that's bigger and more powerful than its predecessor!

However, Lexus is promising the new unit not only offers greater performance than the 3.0-litre it replaces, but also better economy and emissions. The cost of this? A £1,350 price rise to £31,890.

The new SUV is visually identical to the 3.0-litre version - bar the fresh RX350 badge on the rear. Climb inside, and it's a similar story. There are no changes apart from slightly thicker carpets, although top-of-the-range SE-L versions get a satellite navigation system so precise it even tells you which lane you are in on dual carriageways. What's more, the stereo can now play MP3 music files and DVD videos.

On the move, the RX350 is noticeably swifter than its predecessor, and thanks to a 21 per cent rise in torque to 342Nm, is much stronger when it comes to overtaking. Despite the added performance, the Lexus returns 2mpg more than the 3.0 model, while CO2 emissions are down from 288g/km to 264/g/km. That still leaves it in the top company car tax and road fund licence brackets, but at least the RX is slightly less harmful to the environment than petrol-powered German class rivals.

Most impressively, the new engine is more refined than the 3.0-litre, and is free-revving. The reworked five-speed automatic transmission provides quicker and smoother shifts, too.

Comfort is enhanced by a quieter exhaust and extra soundproofing, while a special acoustic windscreen ensures that wind noise is kept to a minimum. These features, combined with the solid build quality for which the company is known, mean the RX350's cabin is a very relaxing place in which to spend time. It's little wonder the machine is the most popular SUV in the US.

But UK drivers have different needs. Firstly, our roads are twistier, and considering it's supposed to have a tarmac bias, the RX350's handling isn't particularly rewarding. Lexus's engineers have tried to address this by tuning the steering for feel, yet there's still very little feedback. And for a car which is beginning to look dated, we can't help but think it's expensive, too.

On top of that, the 3.5-litre engine still runs on petrol, and economy can't match its oil-burning rivals'. That's why most SUV buyers in this country prefer to go for a diesel - which is something the RX range still doesn't have.