Petrol version of extrovert Lexus RX debuts on British roads, but is it a worthy rival for the Audi Q7 or BMW X5? 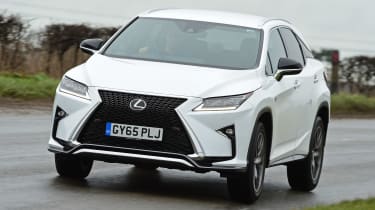 The RX 200t turbo petrol is just too compromised in terms of performance and running costs to make any real impression in this already crowded sector. The interior is beautifully finished, though, and it’s a breeze to drive for long distances, thanks to its comfy seats and whisper-quiet refinement. If you’re still drawn to the crazy origami-styled SUV, we’d recommend you try the more accomplished RX 450h hybrid before parting with your hard-earned cash.

Most people associate Lexus purely with hybrids. A massive 95 per cent of the brand’s UK models are sold with a petrol-electric motor, despite competitors continuing to pursue six and eight-cylinder diesel engines – supposedly for improved driving characteristics and performance.

Yet what if you want all the style and luxury from Toyota’s upmarket Japanese brand, but with a more conventional powertrain? Lexus thinks it has the answer.

No, it’s not a diesel – instead, engineers have now fitted a 2.0-litre four-cylinder petrol engine to the flagship RX SUV, and we’ve driven it on UK roads for the first time. 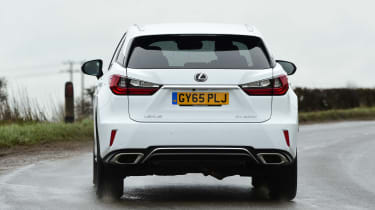 Push the start button, and you’d be forgiven for thinking you’d jumped into the 450h hybrid version. There’s little more than a murmur from the petrol engine as it fires up, ticking over almost silently at idle. Pull away, and it’s equally uneventful, merely whispering its way around town, almost in silence. Getting up to speed is a similar affair, too – the flawed CVT gearbox has been thankfully replaced by a much more user-friendly six-speed automatic, but it’s still rather slow to react and doesn’t make for particularly smooth progress.

Put your foot down, though, and the car bursts into life, albeit with a slightly strained yelp from the four-cylinder engine.

When the new RX was introduced last year, it featured revised suspension and steering settings to make the SUV better to drive. But while it’s tighter and more responsive, it can’t match a Porsche Cayenne on a back-road blast.

It’s a decent motorway car, though, with extensive sound insulation ensuring very little wind or tyre roar enters the cabin – if only the trip computer read more than 22mpg on an average high-speed cruise. 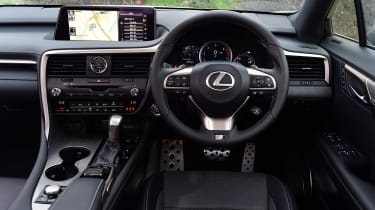 In fact, even if it managed Lexus’ claimed 34.9mpg, it’d still fall far short of its diesel-powered rivals. And then, of course, there’s the RX 450h hybrid, which is significantly faster in a straight line and promises 54.3mpg, while CO2 emissions of 120g/km also make it a company car favourite.

Private buyers might be tempted by the 200t’s attractive list price, though. At £48,995, this F Sport model is £4,000 less than the equivalent hybrid. Equipment is impressive, too, with Premium Navigation, wireless phone charging and ventilated seats all featuring on the standard kit list.

In fact, the only option fitted to our test car was the fancy F Sport White paint (£645). But no matter which model you choose, the Lexus RX can’t compete with rivals on practicality. Unlike a BMW X5 or Audi Q7, the bold RX isn’t available with seven seats. The steeply raked rear window affects boot space, too, with a relatively tiny 924-litre maximum load area.

Still, many will be happy to sacrifice a level of versatility in the pursuit of style, and there’s no denying this new Lexus will turn heads. The brash origami-styled body casts a striking silhouette, while this F Sport model adds further slashes to emphasise its exaggerated proportions. In truth, it’s a bit odd – an X5 is far more restrained. 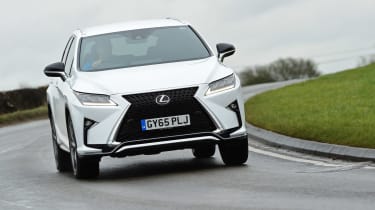 Inside, it gets a more universally accepted layout. The dashboard has a classy sweeping effect, and the massive central screen adds to the upmarket ambience. Frustratingly, Lexus persists with the slow and unresponsive mouse-like infotainment control, and dated graphics – although the set-up is exquisitely finished.

The seats are among the comfiest in the business, too. They’re super soft on long journeys, but add enough bolster to keep you in place and prevent aches and pains. You’ll find plenty of adjustment in the electrically operated steering wheel as well, meaning few people will struggle to find a comfortable driving position.

Things aren’t quite as good in the back, though. The sloping roofline eats into headroom, while the high floor means those with longer legs will feel like they’re sitting with their knees around their ears.

The dark headlining and narrow tinted windows made our F Sport model feel quite claustrophobic, too. The seats are still comfortable, however, and as there’s no central transmission tunnel, three adults can sit in the back with ease.