The Lynk & Co 03 is the third model from the Chinese firm, but do they pose a serious threat to the established European brands? 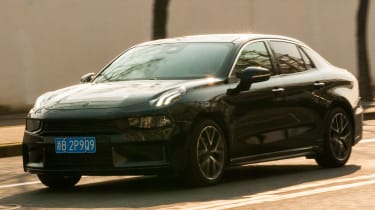 The Lynk & Co 03 is one of the most convincing Chinese cars we’ve driven to date. It takes the brand’s distinctive DNA and packages it into more attractive offering, doing away with some of the 01 and 02’s awkward angles. While the 03 isn’t yet confirmed for Europe, there’s no doubt it can compete with mainstream makers when it comes to quality, refinement and standard kit. The fact it’s reasonably engaging to drive tops off the package.

Lynk & Co is one of a new breed of Chinese brands bursting onto the scene with products that force legacy makers to sit up and pay attention. For Lynk, its trump card is its connection with Volvo, which provides a useful combination of European and Chinese know-how.

We’ve already driven the Lynk & Co 01 and 02 SUVs, but this is the company’s third offering: the not-so-imaginatively named 03. Europe’s penchant for crossovers and 4x4s means the 01 and 02 will both go on sale here by the end of 2020, though it’s not yet clear whether the saloon will arrive in due course.

The Lynk & Co 03 we’re driving here cuts a sharp silhouette. It transfers the company’s DNA into a three-box package with surprising success; the split lights work much better on this well proportioned compact saloon. 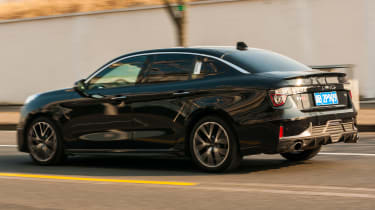 Inside, the basic dashboard design is a carried over from the brand’s earlier models with the controls and screen placed within easy access of the driver. Material quality is exemplary and pushes the level of premium competitors like the forthcoming Mercedes A-Class Saloon. Not only is the dash covered in soft touch plastics, it also incorporates textured materials.

Thanks to the panoramic sunroof, the interior feels bright and airy. This does cut into rear passenger headroom, however, meaning it isn’t the most spacious car for passengers. A low centre transmission tunnel helps with middle-seat comfort, but the car’s narrow overall dimensions means it’s still not particularly accommodating.

Those in the back get two USB charge points, while in the front there is a wireless charging pad. There’s space in the boot to fit at least two large suitcases, although some volume is eaten up by the goose neck hinges.

Our Chinese test car featured the 1.5-litre three-cylinder turbo petrol found in the Volvo XC40. A 2.0-litre version is on the way, and a plug-in hybrid based around the smaller engine will debut later this year. Lynk & Co is also working on a performance model inspired by the Cyan Racing car set to grace this year’s FIA World Touring Car Cup.

The only gearbox on offer on our range topping Hyper Pro test model is a seven-speed dual-clutch unit although low-spec versions do come with a six-speed manual option. While the three-cylinder petrol unit is very smooth and largely vibration-free, the transmission does tend to jolt when moving off.

Under normal driving there seems to be little difference between the Comfort and Sport driving modes (there is also an Eco mode) with the car feeling alert and responsive. However, try overtaking and you notice the difference Sport mode offers – giving the much-needed kick down just when you need it. Steering mounted paddle shifters add to the general sporty feel of the car. 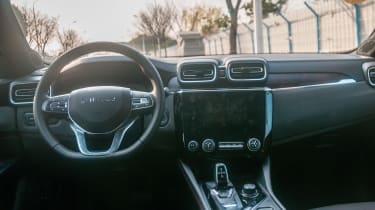 Throw the car around and the CMA platform stays reassuringly composed, although our test roads had nothing much in the way of tight corners to cause it stress. With a good power to weight ratio and a drag coefficient of only 0.27cd, the 03 leaves many competitors in its wake.

Voice controls can be used for the navigation and air-conditioning, along with making a telephone call or sending a text. And in general the equipment level is very generous, even including a built-in dashcam. The Lynk & Co 03 bristles with both active and passive safety measures such as autonomous emergency braking, and blind-spot warning indicators, too.

While the 03 is destined for the brand’s US launch, where no doubt it will prove ample competition for the VW Jetta, it is currently not expected in Europe. This is the car Qoros promised to be and never lived up to – at last a Chinese brand has managed to meld something that works for the both the export and domestic markets. While Europeans generally dislike small saloons this one has the ability to prove the exception.