Weighing up the pros and cons of the Mazda 2 and Ford Fiesta, which of these fun-to-drive superminis makes a wiser buy? 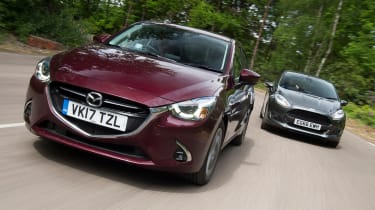 Superminis must be cost effective, but that doesn’t mean you have to sacrifice sporting intent or style. You certainly don’t need to with the facelifted Mazda 2, as the Japanese maker has added this sharp-looking, well equipped GT trim to the range.

• These are the best superminis on sale

The newcomer isn’t exactly cutting edge, however. Rivals have been offering racier looks with frugal engine options for a while, including Ford’s Fiesta ST-Line. And while this is soon to be replaced, even in its current form the Fiesta sets the standard for driving fun and style. It also uses a 1.0-litre turbo, whereas its Mazda counterpart has a naturally aspirated petrol engine.

These are two of the best superminis to drive, but which better balances sportiness and efficiency? We drive them to find out. 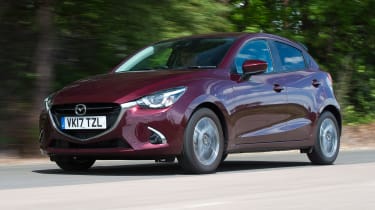 The Mazda 2 GT uses the firm’s 89bhp 1.5-litre engine. It’s a sweet unit, but is 10bhp down on the Ford’s. However, this isn’t where the heart of the problem lies. The lack of a turbo means the Mazda kicks out only 148Nm of torque, and it’s produced relatively high up the rev range, at 4,000rpm.

You have to wind the engine up to extract the performance as a result, but this is no great hardship as the four-cylinder unit revs sweetly to its 6,000rpm power peak. 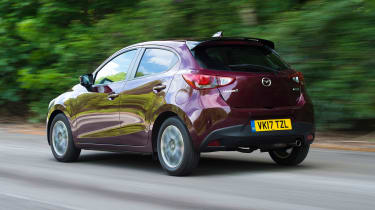 The slick five-speed manual gearbox draws you in further. You can slot upshifts easily as the throw is just the right length, and weighted nicely, too. However, the lack of torque becomes more of an issue around town and at lower speeds. It means the Mazda isn’t as flexible as the turbocharged Ford, which is less taxing to drive.

The GT is no slouch though, and was actually one tenth faster than the Fiesta from 0-60mph, taking 9.9 seconds. It extended this advantage and was also 0.9 seconds faster from 30-70mph through the gears, taking 10.2 seconds. However, its performance advantage came over these full-throttle tests in which you rev the engine hard. In-gear, the lack of torque becomes much more noticeable, and the GT trailed the Fiesta in our acceleration tests between 30-50mph in third and fourth, and 50-70mph in top.

Keep the engine on the boil and the chassis feels keen to impress. The steering is heavier than the Ford’s and provides a little less feel, with a slightly more rubbery sense to its response, but there’s a good level of grip for a standard supermini.

It allows you to carry plenty of speed through corners thanks to the decent body control, but it does mean over rougher roads the ride can become unsettled, transmitting vibrations through to the cabin which makes some of the harder plastics buzz and fizz. 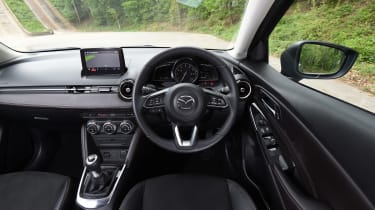 At £16,395, the GT isn’t the cheapest option around, or even in the Mazda 2 range – but while there are some hard surfaces inside, it’s no more than you get in the Fiesta. The rest of the interior is tactile and better laid-out than the Ford. A decent level of kit goes some way to justifying the price, as LED headlights, 16-inch alloys, part-leather seats, sat-nav, DAB and cruise control are all standard.

Our car’s Deep Crimson Mica metallic paint is unique to the GT and higher-powered GT Sport models, so it’s easy to spot these trims. However, it’s harder to notice the Mazda 2’s updated design. The changes are subtle, including new seat fabrics, a new steering wheel and revised door mirrors. 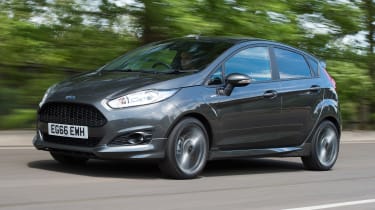 The Fiesta routinely tops the list of best-sellers in Britain, and this is no surprise given how sharp it is to drive. Ford was a little late to release this sportier-looking ST-Line version, but the car has an appealing combination of looks and usability along similar lines to the Mazda.

At £16,765 in five-door form (a three-door model is also available), and with Ford’s 99bhp 1.0-litre three-cylinder turbo engine, it’s slightly more expensive than the 2 GT, but it offers more power. The engine doesn’t spin quite as freely as Mazda’s naturally aspirated unit, but it’s still very pleasant. 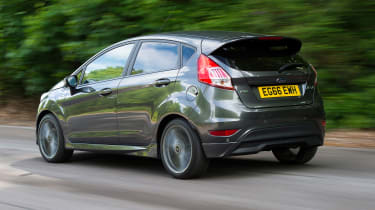 This is down to the 170Nm of torque delivered from just 1,400rpm. It’s not heavily turbocharged, so response is good and more of the performance is delivered earlier in the rev range than the Mazda. Though the Ford is 80kg heavier, it had the edge.

The ST-Line accelerated from 50-70mph in top in 13.2 seconds – four seconds faster than the Mazda. This advantage was replicated between 30-50mph in third and fourth, beating the Mazda’s times by 0.3 and 1.5 seconds respectively.

It’s the way the Ford delivers its torque that’s fun, too. It pulls smoothly from low down and has another kick in the mid-range. You can rev it out to a muted growl from under the bonnet, but you don’t need to do this to make progress. The extra torque lets you change up early and keep revs lower. The engine is quieter anyway, but driving like this is also more relaxing. The five-speed manual gearbox isn’t quite as snicky and engaging as the Mazda’s, but the shift action still involves you nicely. 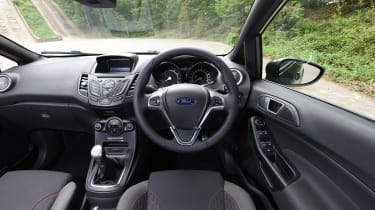 At higher speeds the Fiesta elevates its game to a level the Mazda can’t match. The steering is more transparent, relaying more feedback. There’s also more grip and adjustability in the Ford’s set-up. The damping is excellent as well, tying the body down on bumpy roads and offering great wheel control.

Even on larger 17-inch alloys, the ride is more settled than the Mazda’s. You feel bumps, but the Ford removes harshness. There’s less road noise, too, which combined with the quieter engine and more compliant edge to the ride makes the Fiesta the more refined car here.

However, it’s not all positive. The Ford’s cabin hasn’t aged well, with a messy layout for the infotainment system. While the car costs more, it looks cheaper. The level of kit offered doesn’t stack up to the Mazda’s spec, either. ST-Line trim gets sports seats, DAB and manual air-con. Sat-nav is a £400 extra, cruise control costs £150, keyless entry another £450, climate control £275 and rear parking sensors £300 as part of the City Pack. 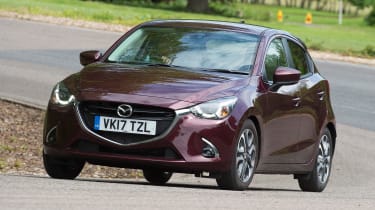 The Mazda better balances all the areas a supermini needs to cover, with more standard equipment. It offers good driver involvement, but can’t match the Ford’s chassis. However, a more premium feel and practicality mean it’ll be easier to live with, while running costs should be affordable. 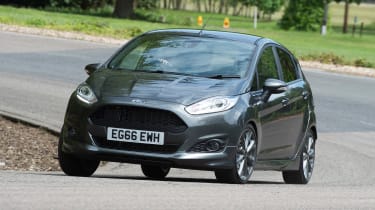 There’s no question the Fiesta is better to drive, and cheaper to run, too. However, it’s more expensive outright and on PCP, and although it has a practicality advantage over the Mazda, the lack of standard equipment – including autonomous braking – and the Ford’s old interior means it just loses out.