The Mazda 3 isn’t the most economical car in its class, but given the performance, it does well

It isn’t hard to find rival family hatchbacks that do better than the Mazda 3 in terms of fuel economy and emissions, but when you consider the size of the 2.2-litre diesel and how fast it is, the 3 does extremely well for itself. The most economical version is the 1.5-litre diesel, which returns claimed economy of 74.3mpg and emits 99g/km of CO2.

One thing to bear in mind is that the automatic gearbox really takes the edge off efficiency. The 2.2-litre diesel hatchback with an automatic transmission drops to 58.9mpg with CO2 levels rising to 129g/km, while the 1.5D breaks the 100g/km mark, which reduces its economy benefits. There are similar reductions for the petrol engines. 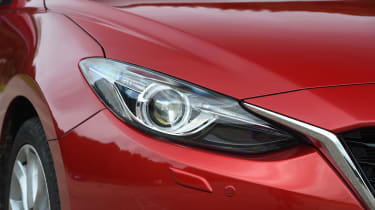 Insurance groups start at 16 for the Mazda 3 fitted with the 1.5-litre diesel and rise to 24 for the 2.2-litre diesel Sport Nav. This is one of the areas in which the Mazda lags slightly compared to its biggest rivals, as it is a few groups higher than every comparative Ford Focus and Vauxhall Astra. Some Volkswagen Golfs are more expensive to insure and some are cheaper – it just depends on the model.

Private buyers will be heartened by the predicted residuals of around 43 per cent after three years and 36,000 miles – and that’s also good news for companies, who will see attractive lease rates as a result. The Volkswagen Golf and the Audi A3 traditionally have strong residual values but the Mazda’s is still competitive and much stronger than the used prices typically associated with rivals such as the Ford Focus and the Vauxhall Astra.