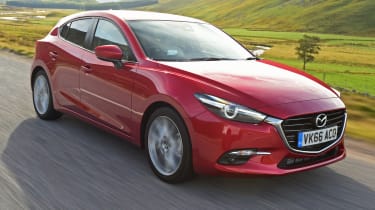 Mazda has a reputation for producing cars that are good fun to drive. Much of this comes from its incredibly successful MX-5 roadster, which is the world’s best-selling sports car and widely renowned as one of the best cars to drive at any price.

Even better is that a lot of the components and characteristics that make the MX-5 sports car so much fun tend to find their way into more conventional models, and the Mazda 3 is no exception. Thanks to its agile handling and rev-happy engine, the 3 has a surprising amount to offer for keen drivers, and it's a front-runner for driving fun in the hatchback sector. 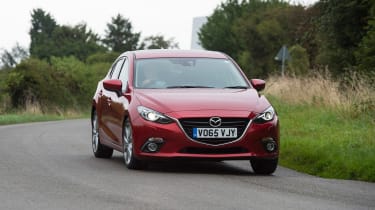 Point the Mazda through a series of corners, and it’s immediately obvious that it has been developed by the same firm that makes the MX-5 roadster. The steering is quick and naturally weighted, while the car gives the impression that all four tyres are sharing the cornering loads equally, helping to create a feeling of near-perfect balance. Body control is also excellent, and the poised Mazda comfortably shrugs off mid-corner bumps.

Yet this agility on twisting roads doesn’t come at the expense of comfort, as the 3 rides bumps with surprising suppleness. Even potholes and sharp ridges fail to upset the car’s composure, especially in SE models on their modest 16-inch wheels wearing high-profile tyres.

2016 updates did little to change the driving experience, despite Mazda making a song and dance about its new 'G-Vectoring' technology. Essentially, the system subtly adjusts torque delivery according to steering angle, with the intention of making weight transfer through corners smoother. It's said to improve stability and comfort on longer journeys, but we didn't really notice the difference.

The Mazda 3 is also fast, especially the 2.2-litre diesel, which packs 148bhp and has a 0-62mph time of 8.0 seconds in the Fastback saloon and 8.1 seconds in the hatchback. The diesel engine also has a lot of mid range pulling power and it’s really responsive, so you can make the most of the engine simply by leaving it in gear – great for overtaking or on the motorway. However, Mazda’s six-speed manual gearbox delivers an unrivalled shift action. Snappy, positive and benefiting from a relatively short throw, it adds an extra layer of driver involvement to the 3.

The diesel is also extremely smooth, so much so that you wouldn’t really know it’s a diesel either on the move or when the engine is just ticking over. Even so Mazda felt the need to add a new sound deadening device in the engine to reduce vibration for the 2016 facelift, while further tweaks subtly improved throttle response.

The 2.0-litre 118bhp petrol engine is expected to be the biggest seller in the Mazda 3. It lacks the mid-range punch of the diesel but it isn’t far behind it in terms of acceleration – you’re looking at 0-62mph in 8.9 seconds for the hatchback and 8.8 seconds from the Fastback. You have to drive it a fair bit harder than the diesel to get the most out of it, though, and it can get unpleasantly noisy at high revs. 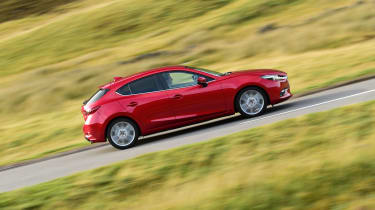 There’s also the option of a more powerful 163bhp version of the 2.0-litre petrol engine, which is almost as sprightly as the diesel with 0-62mph in 8.2 seconds, though it’s only available with the hatchback.

The 1.5-litre diesel is a tax-efficient engine designed for fleet use. It didn't feel very quick in the smaller Mazda 2 supermini where it debuted, and it feels lethargic at times in the heavier 3.

All the engines use Mazda’s SkyActiv technology, which aims to make the cars more efficient through saving weight. Those savings translate into both stronger performance and better fuel economy: the current 3 is much lighter on its feet and far more economical than its predecessor – and even that didn’t handle badly.

Surprisingly, Mazda hasn’t sacrificed refinement for performance and handling, as is often the case with sportier cars. The 2.2-litre diesel is extremely quiet for such an engine and the 2.0-litre petrol is similarly hushed and smooth.

Wind noise is also very low, but there is a bit of tyre and road noise, especially if you opt for a Sport Nav model with larger wheels. As impressive as the Mazda 3 is in this area, it’s got a way to go to have the Volkswagen Golf and the Audi A3 licked on refinement.