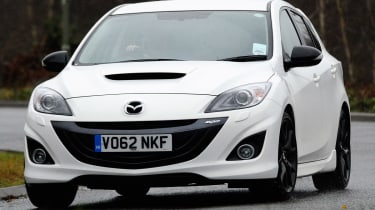 Sharp looks, a taut chassis and a powerful yet reasonably economical diesel engine mean the 6 is a convincing choice if you want a family car with a sporting edge. A comprehensive kit list is the icing on the cake, while low tax costs make it a smart company car, too.

While most manufacturers have abandoned saloons in favour of more practical hatchbacks, Mazda has gone back to four doors for its new 6. And the latest car has a dramatic look compared to the upright and sensible VW Passat saloon.

The chiseled nose features a chrome accent that runs from the grille into the hawkeye headlights, and the bulging wheelarches give the car a purposeful stance. The roofline arcs back towards the tail to provide a coupé-style profile, and at the rear are more curves and sharp edges.

It looks great from virtually every angle, and the Mazda 6 definitely makes a bold style statement compared to the restrained Passat and Skoda Superb. Plus, our test model stood out even further with its optional Soul Red metallic paint finish.

Inside, it has a sporty feel. The shape of the grille is echoed in the pair of air vents on the centre console, there’s a distinctive dark red flash across the dash and the cowled dials and three-spoke steering wheel add a racy touch. But it’s let down a little by the digital readouts for the trip computer and climate control, as these look dated compared to the Passat’s displays. The 5.8-inch touchscreen with optional integrated TomTom sat-nav is on the small side, although it’s easy to navigate using the controller between the seats. But the 6 trails a little on build quality – although it feels well put together overall, there are too many hard plastics and some of the switchgear isn’t as precise as the Volkswagen’s.

This top-spec Sport comes with electrically adjustable seats, and it’s easy to get comfortable behind the wheel. You sit lower in the Mazda than you do in its rivals, further enhancing its sporting credentials. Back seat passengers sit low, too, although there’s plenty of room.

The swooping roofline does cut into the view out of the side windows, but there’s just as much headroom as there is in the Passat. However, neither saloon matches the Superb for legroom, and the Mazda’s dramatic lines further hamper practicality. At the back, the boot opens to reveal a 483-litre space – that’s 83 litres less than in the VW and a huge 112 litres down on the cavernous Skoda. On the plus side, the opening is just as wide as the Passat’s and the load space is long, while two easily accessible levers make it easy to fold the split rear seat in one move.

Fire up the 2.2-litre diesel and you’re greeted by a smooth thrum. This is the same SkyActiv engine as is found in top-spec versions of the Mazda CX-5, and our car’s 173bhp version proved powerful and responsive. A slippery surface didn’t help the Mazda’s 0-60mph time on test, but in every other trial it was quicker than either of its rivals here. It feels fast, too. The slick-shifting six-speed box has a short, positive throw, while throttle response is instantaneous, even in the higher gears.

The 6 backs up its straight-line performance with sharp handling. Turn-in is positive, the steering has plenty of feedback and the car feels light on its feet compared to the leaden Skoda and VW, with plenty of grip. On twisty back roads it’ll easily put a smile on your face. The downside is a slightly firmer ride than its rivals’ here, but this is in no way unbearable – and, for some people, it’ll be a small price to pay for driving enjoyment.

Usually, scintillating performance comes at the expense of economy, but that’s not the case with the 6. Mazda has incorporated a raft of weight and fuel-saving technologies, including lightweight construction, stop-start and a gear indicator that shows you the recommended ratio, rather than the one you’re in. Also, Mazda’s clever i-Eloop system recuperates braking energy to power the electrics instead of wasting engine power.

This all helps the 2.2-litre diesel deliver the lowest emissions here, which in turn makes the 6 the best company car choice. Fuel economy was also reasonable on test, with a return of 38mpg.

And while the Mazda is marginally more expensive than the Passat, it comes with a host of standard kit. Leather trim, front and rear parking sensors and a reversing camera, a 10-speaker Bose stereo and xenon lights are all included; to match this spec in the other cars, you’d have to raid the options.

That long equipment list easily cancels out the price disadvantage and makes the Mazda 6 a strong contender in this test.