Our favourite family car, the Skoda Superb, is still a versatile choice 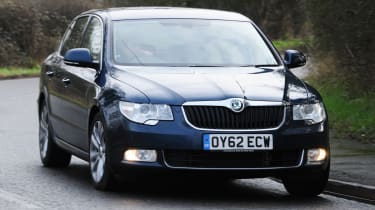 Clever packaging means the Superb is the car to buy for maximum space, while the SE Plus has a decent kit count. However, it can’t match either rival’s sporty dynamics. High emissions mean our reigning champ finishes in third place here.

Few family cars are as versatile as the Skoda Superb, but you’d be hard-pressed to call it beautiful. Line up the hatchback next to the new Mazda 6 and it’s a shrinking violet in comparison. The problem is the incohesive long roof and hatchback rear end give it a look somewhere between a four-door and five-door.

Then again, that’s exactly what the Superb is. The clever TwinDoor rear provides a standard saloon opening, but you can press a button to get a hatchback opening, with the whole back screen lifting up, for better access to the boot.

Inside it’s well built, but feels a step behind the more modern cabins of the Mazda and Volkswagen. While the switchgear is good to use, it doesn’t quite have the polished perfection of the VW Passat and lacks the 6’s stylish design.

Front seat space is on a par with its rivals’, though, and the Skoda really pulls ahead in the back. Despite being the shortest and narrowest car here, it has as much interior space as any limo. You can stretch out your legs with room to spare, while the neat door pillar-mounted air vents are a luxury car touch.

The Superb’s boot is the most practical here, boosted by the TwinDoor set-up. But the tailgate resets to saloon mode every time you unlock it, and it’s a bit of a fiddle to switch back to the more useful hatch mode.

Under the bonnet, the 2.0 TDI diesel is mated to a shorter-ratio gearbox than in the Passat, so the Superb had the measure of the VW in our performance tests at the track. However, it still trailed the rapid Mazda.

And this failure to keep pace with the newcomer was reflected in the rest of the driving experience. The Superb isn’t your first choice for an engaging drive, as it isn’t offered in a Sport spec like its rivals. Instead, our SE Plus was designed for comfort, and the soft suspension settings meant lots of body roll.

There’s plenty of grip, and the Skoda is composed; it’s just not that enjoyable to drive. Where the car does excel is on the motorway. It’s a relaxed cruiser that soaks up the bumps, and it proved to be the quietest of our trio at 70mph even though the engine is turning at higher revs than the Passat’s.

As such, we’d recommend the DSG auto fitted to the car in our pictures. It suits the Superb’s character, as it takes the strain out of changing gears without affecting economy too badly.

Looking at the figures, the £23,755 Superb is a mixed affair. It undercuts the 6 by £1,740, and with sat-nav, Bluetooth and climate control as standard, it looks decent value. But again, you have to raid the options list to match the Mazda, while kit like a reversing camera or leather seats isn’t available. To get the latter, you have to upgrade to the £25,075 Elegance.

Test economy was a respectable 40.8mpg, although as the 2.0 TDI does without the VW’s fuel-saving kit, it emits more CO2, at 149g/km. That means road tax costs £135 a year, while company buyers will face bigger tax bills, too.

So while the Superb is still a great family car, its poor emissions and lack of sporting edge mean it faces an uphill struggle here.