The sensible, high-quality VW Passat is a fine buy for families. But is it enough fun? 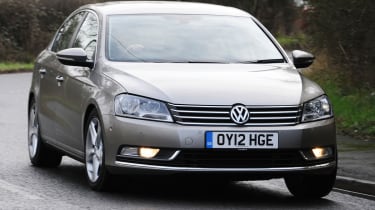 It looks a bit ordinary compared to the Mazda, but the Passat is still a fine family saloon. It offers excellent quality and is very well built, although this Sport model isn’t much fun to drive, while the list of standard equipment doesn’t impress.

If you’re after a comfortable, high-quality family saloon, the Volkswagen Passat should be on your shortlist. However, buyers wanting to add style to the mix will find it can’t hold a candle to the new Mazda 6.

The car in our pictures is an SE, but the Sport version we tested is very similar – the only differences being 15mm-lower suspension and larger 17-inch alloy wheels. Overall, the Passat’s plain ‘three-box’ design is sensible where the Mazda is dynamic.

Climb inside and the VW is a step ahead of its rivals here. There are soft-touch plastics and brushed aluminium trim, while the knurled metal knobs and switches have a real precision feel. Everything feels solidly put together, too, and the Passat rivals executive models from Audi and BMW for the quality of its switchgear.

It’s easy to get comfortable at the wheel, while back seat passengers get a better deal than those in the Mazda, thanks to a raised seating position that affords a clearer view of the road ahead. Boot space is better than the 6’s, too, although both cars have a relatively narrow opening. The Passat lags behind the Skoda Superb for overall capacity as well.

The Skoda and VW we tested use the same 168bhp 2.0-litre TDI diesel, yet this is nowhere near as smooth as the Mazda’s engine when you fire it up. Things improve on the move, but that’s when you realise the Passat is designed with comfort in mind, rather than a sporty driving experience. At the track, it was the slowest car in all of our acceleration tests. This disappointing performance can be put down to the fact that VW’s BlueMotion Technology tweaks include long gear ratios.

While the Passat Sport is fitted with VW’s clever torque-vectoring XDS diff, the car proved sluggish when compared to the Mazda. There was more body roll in corners and the Passat lacked the 6’s immediate reactions when changing direction.

Where the VW did excel was on the motorway. That long gearing combined with the softer suspension to make it relaxing and ensure it coped better with bumps than the stiff Mazda. But the Passat struggles to make a case for itself when you’re crunching the numbers. It costs £375 less to buy than the Mazda, at £25,120, but to match the new car’s equipment list you would have to add nearly £4,000 of extras to your VW.

The 2.0 TDI also has higher emissions, at 120g/km, so road tax and company car tax bills will be more expensive. The only saving grace is a fuel return of 43.2mpg on our test, which means you can travel an extra 150 miles between fill-ups.

So although the Passat feels like a premium product and is a master at motorway cruising, the lack of dynamic ability means it’s difficult to take the Sport model seriously as an involving driver’s car.