Mazda CX-5 is the latest entry to the crossover segment, and Mazda is promising it's also the best 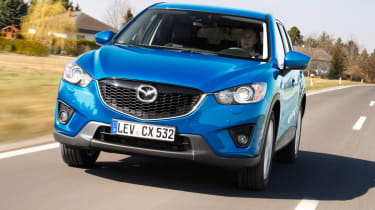 The Mazda CX-5 showed real promise as a model that could bring something different to the crossover class: an SUV that was great to drive. It’s lost some of its sharpness somewhere between prototype and production, but this is still one of the best-handling cars in its class. It’s comfortable, efficient, spacious and very refined, so customers will find little to complain about. The only potential stumbling block is its price, which is more than you’ll pay for the capable and well established Skoda Yeti.

When you’re as late to the crossover party as the Mazda CX-5 is, you really need to bring something special. Cars like the Skoda Yeti, Nissan Qashqai and VW Tiguan are well established, so why would you buy a CX-5?
It one of the lightest crossovers on the market thanks to its hi-tech SkyActiv chassis, so it’s very fuel-efficient. There’s class-leading rear legroom and boot space, while the cabin has quality soft-touch plastics and solid switchgear.
It drives well, too. Mazda will offer a choice of 2.2-litre diesel engines, producing 148bhp or 172bhp, alongside a 163bhp 2.0-litre petrol. All except the petrol version will be available with four-wheel drive.

We tested the range-topping 172bhp diesel, which claims a 0-62mph time of 8.8 seconds. It’s very refined and power delivery is so smooth that it feels like a naturally aspirated petrol. If you don’t need four-wheel drive, then the 148bhp diesel is just as good and only a second slower from 0-62mph. No matter which model you go for, you get a short-shift gearbox inspired by the MX-5’s.
Considering its performance and four-wheel-drive set-up, our test car claimed a very impressive 54.3mpg and 136g/km of CO2. The lower-powered diesel posts 61.4mpg and 119g/km, which are the best figures in the class.
We drove an early prototype of the CX-5 in Issue 1,181 and loved its tight handling and sporty steering. This production version has been tweaked and the focus has shifted. The suspension is softer, so it’s not as agile – yet it still corners well – and the steering is lighter to make life easier around town. There’s little to complain about, but the prototype offered something different in the class – this car feels like any of its rivals.
That’s not a bad thing, but the CX-5 was shaping up to be a 4x4 with a real emphasis on driving thrills; now it’s just a consistent all-rounder. If it’s aiming to be just like the competition, you’d expect a price to match.
The range kicks off at £21,395, but our flagship Sport Nav is £27,595 – roughly the same as a top-spec Qashqai – and has everything you could possibly need, from sat-nav, heated front seats and a Bose stereo to keyless entry, 19-inch alloys and full leather.
It’s an impressive checklist, but when you consider a range-topping four-wheel-drive diesel Skoda Yeti is £23,790, it’s worth thinking twice before buying.
Share this on TwitterShare this on FacebookEmail