Mazda's CX-7 is a stylish soft-roader with sporting intentions. Does it deliver? 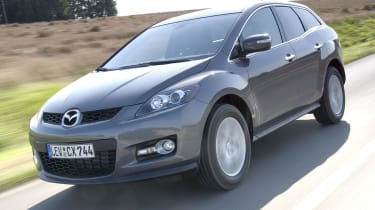 The latest Mazda hits the spot as a sporty compact SUV, thanks to its combination of sleek looks, decent handling and strong performance. A long list of standard equipment and solid build quality also boost its appeal, but there is a price to pay – at the pumps. So, while the newcomer stands apart from conventional SUV rivals, its thirsty real-world fuel consumption is likely to make next year’s diesel CX-7 the most desirable in the line-up.

Barely a day goes by with­out another compact SUV arriving in showrooms. But Mazda’s latest model is an off-roader with a difference – it’s designed to stay on the tarmac.

The Japanese manufacturer is billing the CX-7 as a ‘sports crossover’ – so what exactly does that mean if you’re considering buying one?

Mazda claims the new 4x4 is a sports car with the look and practicality of an off-roader, but its five seats and permanent four-wheel drive are nothing to shout about in this sector. However, the 2.3-litre turbo engine from the hot 3 MPS hatch gives the CX-7’s promises of perfor­mance some genuine credibility.

There’s also a slick six-speed manual gearbox where you might expect to find an automatic shift. It’s the only transmission option, and further under­lines the model’s sporting intent.

From the outside, the newcomer looks more like a 4WD than a sports car, although its jacked-up bodywork is undeniably sleek. It’s easy to spot where the company’s designers have looked for inspiration, too, because the pronounced wheelarches, steeply raked windscreen, narrow headlamps and gaping grille all borrow heavily from the Mazda RX-8.

At the back, there are fewer similarities with the coupé, as a conventional tailgate opens to reveal a mod­est 455-litre boot. But practicality is enhanced by a handy one-touch seat folding mechanism, which increases the load area to 1,348 litres.

Further forward, the angled windscreen and neat instruments give the cabin the feel of a traditional saloon or hatch. Yet there’s also the commanding driving position of a 4x4.

Standard equipment is generous: leather upholstery, cruise control and xenon headlamps are all included. The cabin is well designed, smart and solidly constructed, but unfortunately there’s no reach adjustment for the steering wheel, while an integrated sat-nav system isn’t even an option.

Out on the road, the turbocharged engine provides a potent 256bhp, and powers the five-seater from 0-62mph in eight seconds – respectable for the class. Once the turbo is spinning, at around 3,000rpm, there’s a considerable amount of urge available, which makes overtaking or merging with fast-flowing traffic easy.

At motorway speeds, engine and road noise are muted, too – although you are reminded of the CX-7’s bluff stance by the sound of the wind round the windscreen pillars and mirrors.

In keeping with its sporty engine, when you press on through corners, the Mazda’s suspension is firm and body roll well controlled. As a result, the CX-7 can be hustled along with confidence, although small imperfections in the road are transmitted into the cabin, particularly at low speeds.

So, should you buy one? Well, des­pite Mazda’s claims, the CX-7 is no sports car, and serious enthusiasts will be better off in a conventional hot hatch, coupé or saloon. What’s more, its thirsty petrol engine doesn’t provide the kind of low-down pulling power that off-road users rely on, so that rules it out for those who need to tackle rough terrain.

However, if you want to make a style statement, the Mazda is a great alternative to Nissan’s eye-catching Murano. And with bosses predicting that fewer than 1,500 CX-7s will find homes in the UK market every year, your well equip­ped and solidly built ‘sports crossover’ SUV will come with a healthy dose of exclusivity, too.