At last Mazda's crossover SUV has received a diesel engine and updated looks, but is it enough to convince UK buyers? 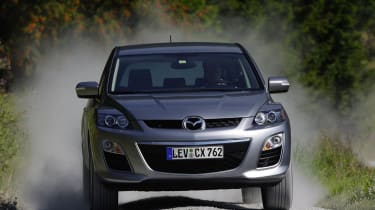 The CX-7 was a car originally designed for the North American market, hence why it was only ever offered with a large petrol engine until now. But with a strong and relatively frugal diesel unit under the bonnet, typically impressive Mazda dynamics and a fresh new look its been given the chance it always deserved to succeed in this country. The drawback is the price – at almost £26,000 it’s encroaching on the territory of more premium compact SUVs, which is why it’s destined to remain a rare sight on UK roads.

The CX-7 has been given a new lease of life! Mazda’s sporty crossover SUV has always been a niche choice and largely overlooked by UK buyers – thanks to the only engine choice being the thirsty 2.3-litre turbocharged petrol engine from the 3 MPS. But two years after in went on sale in Britain, the Japanese firm has reacted to public opinion and fitted a diesel engine as well as updating the looks inside and out.

On the outside the CX-7 now benefits from a larger lower grille, redesigned fog lights and a larger roof spoiler. There’s also a resculpted rear bumper, 19-inch alloy wheels as standard and additional chrome trim on the boot handle and along the sills. Elsewhere the distinctive kink in the shoulder line and swollen wheel arches remain, giving the 4x4 a more dynamic look than most of its rivals in the compact SUV segment.

And it’s a similar story once you pull away. The 2.2-litre diesel engine is a development of the unit first fitted to the Mazda 6, but here it gets an uprated turbocharger and intercooler, and it does a fantastic job of hauling the 1,800kg CX-7 along. In gear acceleration feels livelier than the 0-60mph time suggests, and despite a hint of clatter on start up it revs smoothly and there’s a pleasing warble from the single exhaust once it’s warmed through.

The steering feels light but with surprising amounts of feedback for a car of this size, while the notchy gearshift is unmistakably a Mazda. A five per cent increase in torsional rigidity plus a new set of dampers give the CX-7 nimbleness in the bends, although the ride can feel a little harsh at times. But it’s an acceptable trade off given that cabin noise is so low – something Mazda has worked hard on improving with this car.

When it comes to trim levels and engine choices Mazda are keeping things simple with the CX-7. The 2.3-litre turbo unit has been ditched altogether for the UK leaving the excellent diesel as your only option, while the fully laden Sport Tech-spec is all that’s on offer, too.

With every luxury you could ever need, such as leather upholstery, sat-nav (with a tiny 4.1-inch screen) and a premium stereo all coming as standard, you won’t be left wanting for gadgets. But it comes at a price, £25,785 to be precise - dangerously close to Audi Q5 money.

Rival: Ford Kuga The driver’s choice in the compact SUV class is so accomplished on the move that you’re often left wanting more power from the 136bhp 2.0 TDCi to enjoy it. Its muscular styling and compact dimensions mean it’s great to look at, too, while class-leading economy and CO2 emissions are the icing on the cake.