It aims to offer the thrills of an MX-5 in the body of an SUV. We find out if Mazda's CX-7 meets its brief 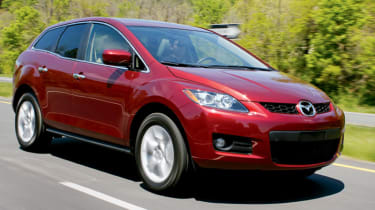 Merging the driving appeal of the MX-5 with the versatility of a BMW X5 might seem an odd idea, but it works. The CX-7 looks good, handles well and has a punchy engine. All it lacks from launch is the diesel unit that will bring running costs in line with UK motoring budgets. Still, if sensibly priced, the petrol CX-7 could soon become a familiar sight.

What if you were able to take the style and character of Mazda's legendary MX-5 and combine it in a more practical body?

The CX-7 is a stylish 4x4 which shares many cues with Mazda's other recent models. The wide wheelarches and swept-back headlamps are distinctive, and while it fails to turn heads out on the road, its smooth surfaces look modern. Although the company's designers acknowledge that their main focus was in creating the sharp looks, the newcomer is also practical.

There's bags of space in the rear and the boot is a decent size, while the rear seats fold forward with a clever spring-loaded mechanism operated from within the luggage bay. But there's no seven-seat option - that's taken care of by the larger US model, the CX-9, although it's unlikely this will go on sale in the UK.

Only in the front is space at a premium. However, the steeply raked windscreen and big centre console create a sportier atmosphere than the average 4x4, emphasised by the three-spoke steering wheel lifted from the MX-5.

Until the diesel variant arrives in 2008, CX-7 buyers must make dowith the 2.3-litre powerplant from the Mazda 6 MPS. The high-performance saloon's all-wheel-drive system has also been adopted - minus its limited slip differential - but the engine's turbocharger has been tuned to develop more torque at low revs.

Our US test car was fitted with a slick-shifting six-speed automatic 'box, but UK variants will have six-speed manual transmissions. This will allow drivers to make the most of the CX-7's powerplant, which pulls strongly and offers gutsy acceleration. A coarse engine note is the only disappointment.

Under the skin, the new 4x4 shares much of its front suspension with the Mazda 6, while the rear architecture is made up of a mixture of components borrowed from the 5 and the 3. The result is an SUV which handles with surprising agility. The firm set-up gives a stiff ride, but body roll is well controlled when cornering, while the hy-draulic power-steering provides decent feel. European models will get slightly different settings, but buyers can expect class-leading handling.

Needless to say, this comes at the expense of any mud-plugging ability. The company's engineers admit the newcomer will cope with rough roads, but nothing more challenging.

So where will the newcomer fit into the UK's crowded SUV market? In terms of size and likely price, it will be pitched somewhere between Honda's CR-V and Nissan's more upmarket Murano. That means buyers can expect to pay around £25,000 for entry-level variants. For those looking for a 4x4 with a little extra style, the CX-7 could provide the perfect solution.