After a tough winter, hatch is due a check-up. Does it get a clean bill of health? 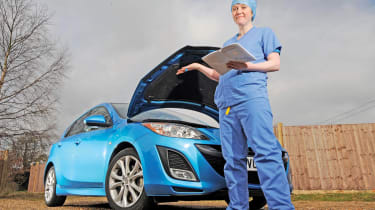 6
With more than 10,000 miles on the clock, our 3 was ready for its first service – and I was all scrubbed up to get my hands dirty!
But I needn’t have bothered. After a surprisingly painless check-up at Milcars in Watford, my five-door friend was given a completely clean bill of health!
In this age of great-value pre- paid maintenance packages, the £239 charge was a bit of a shock. But I didn’t begrudge splashing out on the 3, because it has been given a real run for its money during its first year on the road.
For a start, it has had to double as an all-terrain vehicle, thanks to one of the harshest winters on record. Having tackled ice, snow, mud and torrential rain along the pothole-pitted back roads where I live, I was especially surprised to discover its tyres weren’t more run in. In fact, there was enough tread left in the rubber to see it through to the next service. Bonus!
Dodging disoriented animals in my rural neck of the woods requires some super-sharp brakes and a heavy foot at times, too, so I was equally impressed to find the 3’s pads were still intact and good for many more miles. Probably the car’s greatest achievement over the last 12 months, however, has to be its consistent ability to shrug off the soaring fuel prices with its thrifty 2.2-litre diesel engine.

Over the past few thousand miles, it’s returned 41.4mpg. That’s not to be sniffed at. On some motorway jaunts, it’s gone well beyond this. And despite the car’s constant use, I’m still shocked when the fuel gauge finally warns the tank is close to empty. The cruise control has helped, of course, and is one of the stylish hatch’s best tricks. It’s simple enough for even a technophobe like me to master, and keeps law-abiding – or just plain lazy – motorists on the right side of the speed limit.
The Mazda’s nifty built-in Bluetooth software has allowed me to multitask, too. I now make endless calls while on the move.
As I’m a new mum, the 3 has also been put through its paces as a family car. And until recently, it had passed with flying colours. When my daughter’s big appetite and long legs finally forced her
to upgrade to a new upright Maxi-Cosi chair, however, the space in the back suddenly felt cramped. And after a month, I still haven’t mastered getting her in and out of the seat without banging my head, or hers.
However, I’m fairly confident the super-responsive air-con system and tinted rear windows will help keep her cool when the warm weather comes. And I’ll be glad of the lighter nights, too. On full beam, the 3’s headlamps could do a decent job of alerting passing ships that they’re approaching land. But once dipped, the car suddenly feels as if it’s stumbling around in the dark. A decent dose of summer sun should cure me of those winter blues, though.

“Mazda’s 2.2-litre diesel really is a class act. In terms of smoothness, refinement and pace, it’s one of the best oil-burning engines you will find in a family hatchback.”