Mazda has confirmed specs for the revised MX-5 sports car, with prices starting from £18,995 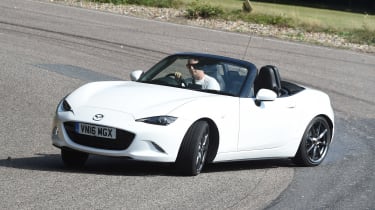 The Mazda MX-5 roadster has been given a significant power boost, and now the firm has announced UK prices and specs for the two-seat sports car. The MX-5 goes on sale in the UK from 1 September and will be priced from £18,995.

As before, there is a choice of soft-top and hard-top RF versions. The basic model is badged SE+, while SE-L Nav+ and Sport Nav+ trims are also available. The range-topping new GT Sport Nav+ trim starts at £25,795.

The RF isn’t available in SE+ trim. RF SE-L Nav cars are available from £22,595, with flagship GT Sport Nav + cars costing £29,195. Both the convertible and RF are also available with an automatic gearbox.

Updated less than a year ago at the Tokyo Motor Show with new steering and suspension settings, this latest round of mechanical updates focus on the range-topping 2.0-litre engine. Power is boosted from 158bhp to 181bhp, while torque is up by 5Nm (to 205Nm) as well. Mazda says the changes result in “refined acceleration control”, which allegedly helps “minimise lag between throttle applications and vehicle response”. As a result, the convertible is eight tenths faster from 0-62mph – hitting the benchmark sprint in 6.5 seconds. Manual and automatic RF models are six-tenths and five-tenths faster respectively.

The engine’s redline jumps from 6,800rpm to 7,500rpm, too. The upgraded changes to the 2.0-litre Skyactiv-G unit now include redesigned lighter pistons and con-rod. In addition, the 2.0-litre engine Mazda have made revisions to the camshafts and exhaust valves, fuel injectors, throttle valve and air intake.

Mazda Europe has also confirmed some numbers for the 1.5-litre SKYACTIV-G engine. All cars get a slight power increase to 131bhp, as well as a moderate torque improvement from 150Nm to 152Nm.

Away from engine changes, the updated MX-5 arrives with new customisation options including a new brown fabric top and dark paint finishes for the 16 and 17-inch wheel designs. On the more practical side of things, the steering column gains reach adjustment for the first time.

Tempted by the Mazda MX-5? Check out our long-term test review with the hard-top RF model…