The extra performance, equipment and value that the 2.0-litre model brings probably makes it a worthy choice. It offers up that added urgency when you need it most, and only serves to enhance all the exhilarating thrills for which this roadster made its name. It’s little wonder so few manufacturers have attempted to challenge the MX-5, but based on what Mazda has developed, they wouldn’t stand a chance.

It’s nearly 25 years since the original Mazda MX-5 landed, and even now there remains little in the way of competition. Its tantalising mix of agility, affordability and style has kept buyers coming back again and again, and this latest fourth-generation model is certain to uphold its appeal.

It’s already bagged Auto Express’ Roadster of the Year award, but this is the first time we’ve driven the higher-powered 158bhp 2.0-litre version in the UK. Sales of the MX-5 are stronger in Britain than anywhere else in Europe, and this 2.0-litre model is set to be the bigger seller in the range of two. 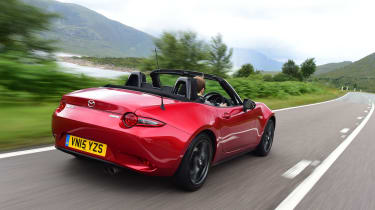 It will set you back a further £850 over the 129bhp 1.5-litre car, although you get an additional 29bhp and 50Nm of torque for your money. That may not sound like a great deal, but powering a car that weighs only a fraction over 1,000kg, it makes a discernible difference.

It knocks a whole second off the 0-62mph sprint time, taking it to 7.3 seconds, while top speed jumps 6mph to 133mph. Where the extra shove really shows is coming out of slower bends, bringing you up to speed with greater ease thanks to the wider torque band.

What the engine also brings is a 25kg weight penalty over the nose, but unless you’re Fernando Alonso or Lewis Hamilton, you’d be hard-pressed to notice. 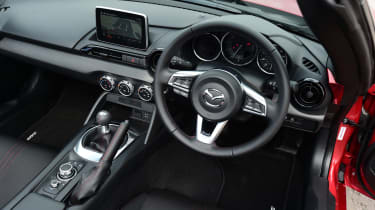 The MX-5’s combination of inherent light-footedness and a direct and darty front end will keep you beaming from ear to ear. There’s also a lovely flex in the body as you turn in, letting you know just how much more it can handle. Another benefit of the 2.0-litre is the addition of a standard limited-slip differential, so heavy boots of throttle provoke the rear end a lot better.

However, it’s the level of involvement and accessibility of the performance on offer which makes – and always has made – the MX-5 so rewarding to drive. The stubby and weighty gearshift encourages changes, while the raspy exhaust note goads you into chasing the engine to its near-7,000rpm rev limit. But even if you ease off, the Mazda holds its own as a compliant and soothing roadster.

The ride is supple and forgiving on the larger 17-inch alloys, but the fabric roof isn’t the best at dispersing wind noise.

And while the 130-litre boot is wide and deep, some may grumble about the lack of storage space in the cabin. If that’s likely to be a deal breaker, perhaps a two-seat roadster really isn’t the car for you anyway.