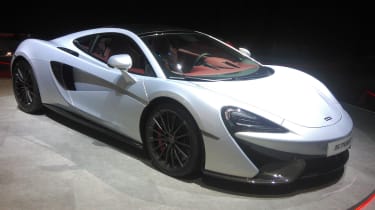 After we saw it in all of its glory at Geneva this year, McLaren has revealed the new 570GT's UK debut will take place at next week's London Motor Show.

The 570GT is the Woking-based firm's latest addition to its Sport Series range -  which boasts more overall boot space than some family hatchbacks. It's been designed to usurp Porsche's position as the ultimate maker of practical sports cars.

Priced from £154,000, the GT is billed as the most usable and luxurious McLaren ever made. It will sit alongside the more focused 540C and 570S Coupe in the range.

The transformation from Coupe to GT is most evident from the outside. The carbon fibre rear deck and flying buttresses from the Coupe have been replaced by a P1-inspired convex glass rear end. A side-hinged glass hatch opens to reveal a new leather-lined luggage Touring Deck that offers 220 litres of space on top of the 150-litre storage area in the nose. Combined, the car’s boot volume is more than you’ll find in a Ford Focus hatchback. 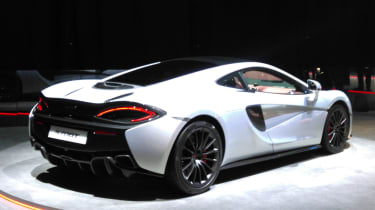 McLaren design chief Rob Melville told Auto Express that the glass deck was side-hinged to provide the best access to the deepest parts of the boot. A conventional top-hinged arrangement would have necessitated an obstructive gas strut. He said the side hinge also reduces the likelihood coming into contact with a hot exhaust. Occupants are able to reach the boot by folding the seats forward, too.

The GT also wears a unique rear spoiler, which is 10mm taller than that on any other Sport Series model. 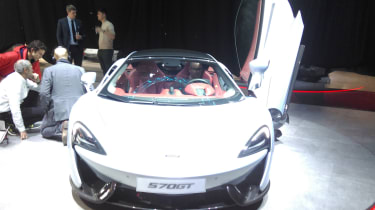 Sport Series vehicle line director Andy Palmer said McLaren has sought to reduce unwanted noise from the increased interior and boot volume. He said the car also uses bespoke Pirelli tyres which contain sound insulating foam to reduce road noise by around 3dB. Additionally, the car features a quieter exhaust than that of the 570S.

The 570GT’s engine and transmission are unchanged from the Coupe, with the 562bhp 3.8-litre twin-turbo V8 hooked up to a seven-speed dual-clutch transmission. The addition of the glass rear end means the 570GT is 37kg heavier than its sibling, and is two-tenths slower from 0-62mph, taking 3.4 seconds.

McLaren has softened the dampers by 15 per cent at the front and 10 per cent at the rear to make the 570GT more usable every day. The carbon ceramic brakes on the Coupe are replaced by steel discs, too. 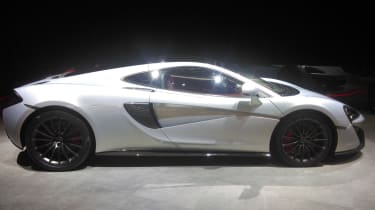 The newcomer will sit above the Coupe at the top of McLaren’s Sport Series range, before a Spider version is introduced in 2017. Prices for the GT will start from £154,000 in the UK.

As the 540 and 570 models are tasked with doubling market volume, the company expects the 570GT to make up more than a third of Sport Series sales. McLaren says around 400-500 570GTs will be sold this year. First customer deliveries are scheduled for the end of the year.

Read our review of the McLaren 570GT here...