The luxury van is spacious, excellently appointed and heinously expensive – we look at some of the best on the market... 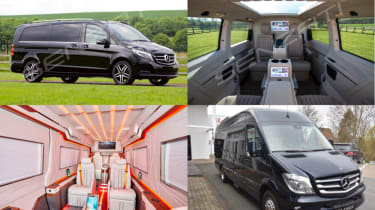 The luxury van market was born to meet the needs of high-flying executives travelling from one merger to the next, but thanks to the extravagant tastes of the super-rich these boxy wonders have evolved in to something altogether more special.

The privilege of being mollycoddled in a van of such devine excellence, though, does not come cheap. All of the vans featured far exceed the prices of the utilitarian vehicles they are based on, and, in some cases, even surpass the astronomical cost of luxury cars such as the Rolls-Royce Phantom.

So read on to find out about the most luxurious vans on the market and, as an added bonus, the craziest motorhome you've ever seen.

Most luxurious vans in the world 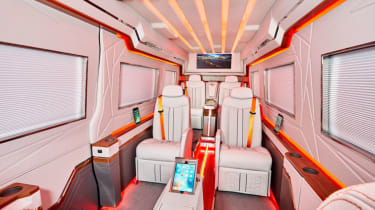 The Klassen Sprinter Armoured Bulletproof VIP is based on the Mercedes Sprinter and offered in two main styles: the Mobile Office and the Transfer. They cost close to half a million pounds and come with bulletproof glass and armor plating. But while the Mobile Office will gently massage passengers in their quilted leather thrones, the Transfer is a much more serious affair. It blends luxury and military with blue lights hidden in the grille and a high-class interior suitable for a prime minister or the chief of police. 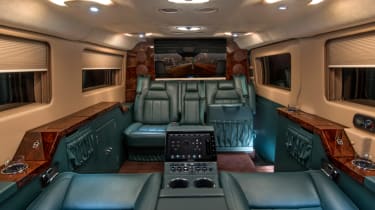 The Becker Ford Transit Jet Van is not only expensive, but it is incredibly exclusive as there is only one in existence. Open the doors and inside you will find polished wood, tasteful leather and lighting conducive to a working environment. Prices start at around £215,000, but opt for something special and the price can quickly rise – Becker previously fitted a modified exercise bike to one of its vans so occupants could exercise on the move. 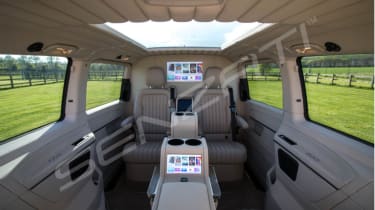 Similar to the Klassen mentioned above, the Senzati Jet Class is based on a Mercedes van, but in this case the smaller Vito, or its people carrying sibling the V-Class. For just under £125,000 you can get a range-topping Jet Line which includes heated and cooled seats with 10 point massaging, 4G and WIFI connectivity and a fridge to keep your snacks chilled – there is even a pair of LED reading lights which cost an unbelievable £995. 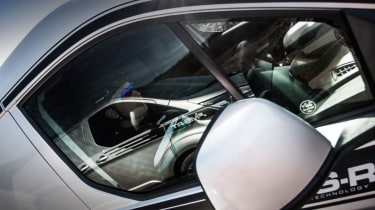 The MS-RT Transit Connect doesn’t offer conventional luxury, but it does provide the rare fusion of motorsport and a small Ford van, which in itself, is a luxury. Unlike the other vans here, prices start at a reasonable £20,995 – which, granted, wouldn't get you much in the way of a house, but there are some particularly spacious sheds in that price bracket.

Thanks to a bespoke front bumper and sporty alloys, the exterior is significantly more aggressive than that of the standard Ford Connect. There is also a full nappa leather interior, sports steering wheel and 6” touchscreen infotainment system. 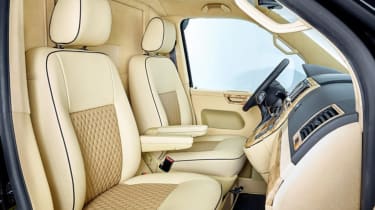 The Klassen Volkswagen T6 Business costs around £132,000 and comes equipped with everything from a flip-out coffee machine and electronically folding desks to a box to keep your cigars/mars bars in – buyers can also spec an LED TV divider to seperate the driver and passengers. The T6 Business includes the Klassen Remote System, which is software that wraps all the passenger controls of the car, such as seating position, heating and lighting, in to one handy application for your phone. 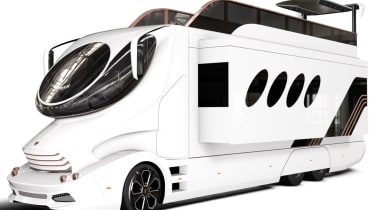 Measuring in at 6m tall, 5m wide and just under 14m long, here we have the Marchi Mobile eleMMent Palazzo Superior. This 28-tonne behemoth is arguably the final word in flightless luxury on the move. Typical spec includes two 42-inch TVs, a carbon fibre cab, master bedroom with King-size bed and kitchen and bathroom areas which would rival a lot of UK homes. With prices averaging out at around £1.8 million, the eleMMent is by far the most expensive luxury van on this list.

From one extreme to another, take a look at the fastest cars in the world!