Mercedes will drive towards its zero emission future with expanded range of hybrid, plug-in and all-electric vehicles 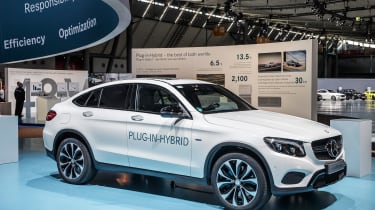 Mercedes has announced a three-prong attack on conventionally powered cars with details of its plan to push for a zero emissions future. The brand will use new hybrid, plug-in and all-electric technology to lower CO2 output and meet ever-stringent legislation – with a new electric SUV set for launch before the end of the decade.

Speaking from Merc’s ‘Road to the Future’ conference in Stuttgart, head of strategy and product planning Wilko Stark said: “The rules of the game are changing. However, we will not change. We will remain champions.”

The company is investing €14.5bn (£11.35bn) in research and development to ensure Mercedes remains at the top of its game when it comes to alternative fuels and low emission vehicles. He said by focusing on three keys areas, the brand would reach some “important milestones” in 2017.

First up is the optimisation of high-tech combustion engines. Stark insisted diesel engines “have a future” and that petrol and diesel engines will continue to decide how much CO2 can be saved on our roads for many decades to come. 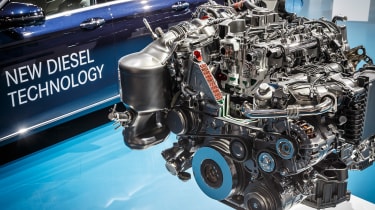 Integrated starter generators (ISG) and belt-driven starter generators (RSG) further enhance efficiency, as well as usually diesel-only particulate filters. The technology will first feature in the facelifted Mercedes S-Class, which is set to go on sale next year. That car will use an in-line six-cylinder engine, though four-cylinder units will appear later.

In two decades, average CO2 emissions across the Mercedes range have dropped from 230g/km to just 123g/km. The new petrol engine technology – alongside improved diesels like the new 2.0-litre four-cylinder in the Mercedes E-Class – should see this figure tumble to less than 100g/km.

Next, Mercedes will capitalise on plug-in hybridisation to further reduce consumption. Allegedly offering customers “the best of both worlds”, Mercedes will boost its plug-in range to 10 models by 2017. Again, the facelift S-Class will benefit from the biggest leap in technology – with the updated S 500e offering more than 30 miles (up from 20 miles) all-electric range. 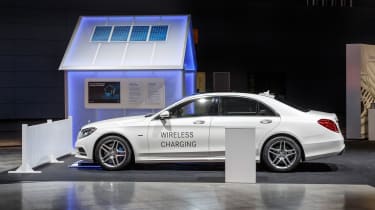 The efficiency boons will be spread across all plug-in models over the next few years, while inductive charging will also feature. Wireless charging will be ready from 2017, and will first feature on the S 500e as an optional extra in addition to existing wired setup. With an efficiency rate of 90 per cent, Mercedes says the car’s high-voltage batteries can be efficiently, conveniently and safely charged in juts 2.5 hours.

A push on zero-local-emission driving – utilising batteries and/or fuel cells – is the final string in the company’s elaborate bow. Mercedes is investing €500m (£391m) in a second battery factory, set to open its doors next summer, which bosses hope will “half the cost” of current plug-in technology.

As a result, Mercedes is currently developing a brand-new all-electric platform, which is set for a Paris Motor Show debut this autumn. It’ll likely the form the basis of Merc’s first all-electric SUV, with separate motors powering the front and rear wheels. We’re told it’ll have a 310-mile electric range, and go on sale before the end of the decade.

As well as the dozen or so plug-in models already on sale, Mercedes sub-brand Smart will launch a trio of electric cars at the Paris Motor Show later this year. The Mercedes GLC F-CELL will go on sale next year, too, as the world’s first plug-in hydrogen fuel call car.

What do you think of Mercedes' plans for the future? Let us know in the comments section below...