The Mercedes S500 Plug-in Hybrid is a true all-rounder: fast, comfortable and efficient all at once 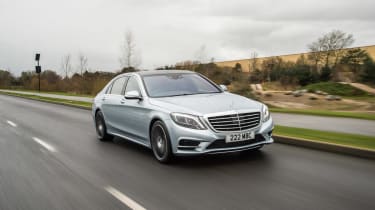 The Mercedes S-Class is now a limousine you can buy with your heart and your head. If your commute is less than 20 miles and you can charge at home, you could run the S500 Plug-In Hybrid for mere pennies. It’s astonishingly quiet in E-Mode, and every bit as luxurious as its petrol and diesel-powered siblings.

You don’t buy a petrol-powered luxury limousine with your eco hat on. If you’re interested in saving the environment or want to keep running costs to a minimum, you opt for a diesel, right?

Mercedes thinks otherwise. It has just fitted its hi-tech S-Class with a twin-turbo V6 petrol engine, coupled to a powerful 114bhp electric motor. The result is the S500 Plug-In, and it’s capable of more than 100mpg.

It looks like any other S-Class, aside from the Plug-In Hybrid badging and additional filler cap on the rear bumper. It’s only available in AMG Line trim, but our test car sat proud on optional 20-inch alloy wheels. Given the car’s sporty styling and twin exhausts, there’s little to tell this super-frugal model from the standard V8 petrol version. 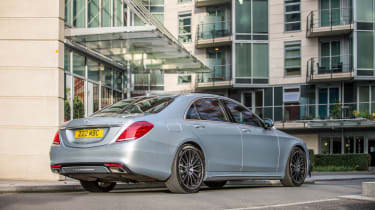 Inside you get the same luxurious interior, with plush leather seats and Merc’s beautiful 12.3-inch TFT colour display. There’s a little button on the centre console to flick through the various driving modes, but again, there are very few details around the cabin to hint at the S500’s eco credentials. There’s even a pair of steering-wheel-mounted paddles to control the Plug-In’s standard seven-speed automatic gearbox.

Push the starter button and instead of a big V6 firing into life, you’re greeted by the sound of silence. Put it into drive, and providing the batteries are fully charged, you can waft in electric-only E-Mode for up to 20 miles.

However, as soon as the batteries run dry, or you require a sudden surge of power, the petrol engine kicks in seamlessly. It never pins you back in your seat, but the smooth wave of torque means it builds speed quickly and effortlessly. It’s only 0.4 seconds slower to 62mph than the thirsty V8-powered S500, despite weighing 200kg more. 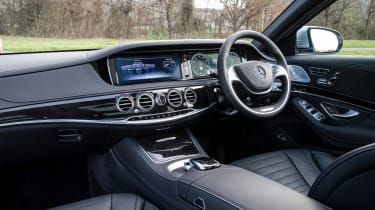 We had a chance to try all four of the S500’s driving modes. E-Mode allows for smooth and silent electric progress – at speeds of up to 87mph. Hybrid mode works well, offering the best of both worlds by using the petrol engine in conjunction with the electric motor.

E-Save mode holds the battery’s charge for use in stop-start traffic, while the Charge function uses the petrol engine to generate electricity and can top up the battery as you drive along. We found this to be particularly effective, filling up surprisingly quickly at motorway speeds.

Mercedes says this Plug-In S-Class will do 100.9mpg and emit just 65g/km of CO2, but in reality it really depends on your driving style, and of course, your ability to charge the batteries from the mains. 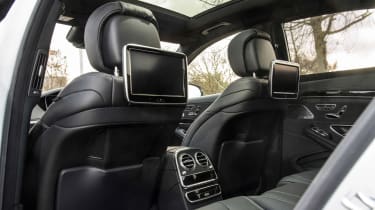 However, there’s plenty of clever tech to ensure maximum fuel economy. If you use the adaptive cruise control and the S-Class senses a slower moving vehicle in front, it’ll kill the engine and coast, before seamlessly building speed again when the path ahead clears. Unlike many electric cars and plug-in hybrids, there’s no feeling of grabby regenerative brakes, so the S500 feels like a normal S-Class to drive.

Pushing the brake pedal actually reverses the electric motor to slow the car, before engaging the conventional brakes if you require more stopping power. It feels completely natural and totally unnoticeable. Information from the car’s GPS data is also fed into a computer to deplete the battery while driving uphill, in the knowledge that it can recharge as the car coasts back down the other side. 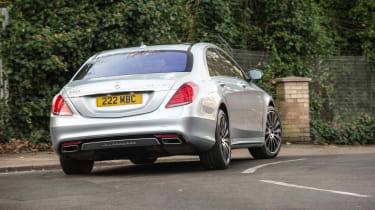 The Mercedes S500 Plug-In will make an awful lot of sense for city-based chauffeurs, or those with the infrastructure required to effectively utilise a car like this. If you live less than 20 miles from the office and can charge both at home and at work, you could essentially run this luxury limo without ever filling it with fuel.

However, for many, exemption from road tax and the London Congestion Charge – itself worth more than £3,000 a year – will be the dealbreaker. Within four years you’ll have recouped the £12,000 premium over the cheaper S350, and that’s without considering the money you’ll save on fuel. Nothing this side of a Bentley or Rolls-Royce can match it for comfort and luxury, and neither of those come close to a Toyota Prius at the pumps.