The new Mercedes A-Class has arrived with an updated look and advanced tech. We drive it for the first time 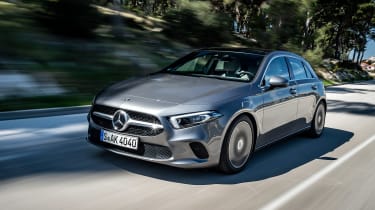 This all-new Mercedes A-Class deserves to continue the success of its predecessor. While it is far from the sharpest car to drive, it sets new benchmarks for design, quality and tech. The badge on the nose will be enough for most, but there’s much more to the firm’s latest family hatch. With the A-Class set to spawn seven further models, it bodes well for the future of Merc’s small car range.

The Mercedes A-Class is the premium family car that others want to beat. Not because it’s particularly spacious, good to drive or easy to live with, but because it sells by the bucket load.

Even as it neared the end of its life, Mercedes shifted 43,717 examples of the outgoing car in the UK last year. That’s more than every Jaguar saloon, sports car and SUV combined. But six years after it launched, the brand has been back to the drawing board.

The new A-Class looks different, and it sits on a revised platform, too, with a new interior, tech and engines. The sleek exterior moves the old car’s aerodynamics into a new dimension. 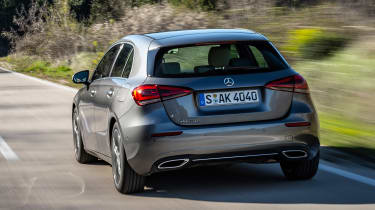 Mercedes says the changes it has made are equivalent to shaving 100kg from the kerbweight, while the cooling systems are so effective that the double shutter grille can remain closed almost entirely from August to April, apparently.

From behind the wheel, the A-Class is unrecognisable from its predecessor. Every model has digital dials and a wide central touchscreen as standard. But it’s the tech contained within these screens that impresses most. The software is more advanced than in the S-Class flagship.

Standout features include augmented-reality navigation, which overlays images from the car’s camera with direction arrows, street names and house numbers. It activates as you approach junctions and proved surprisingly useful on our unfamiliar test route. It’s part of the Advanced Navigation Pack (£495), but to spec it you’ll need to upgrade from the standard seven-inch central screen to the larger 10.25-inch display, too. 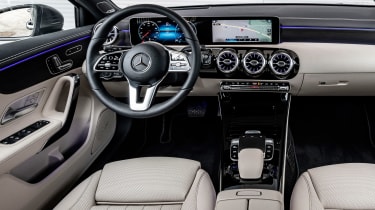 The firm’s new Mercedes-Benz User Experience (MBUX) is standard on all A-Class models, however. It features the voice-activated ‘Hey Mercedes’ system, allowing you to adjust the climate control and ambient lighting or even ask for the weather forecast without taking your hands off the wheel. It’s a bit of a gimmick, though.

There will be three trims in the UK; SE, Sport and AMG Line – and all cars get alloys, DAB radio, keyless go and air-conditioning. The old Garmin sat-nav system is replaced by a slicker in-house set-up, too.

On top of this, you can add an Executive Pack (£1,395), which includes that 10.25-inch central screen, as well as Active Parking Assist and heated seats. Every car on the launch had the Premium Pack (£2,395), too, which keeps the larger screen, but also replaces the seven-inch instrument binnacle with another 10.25-inch display. They look great, and set a new benchmark in the class. 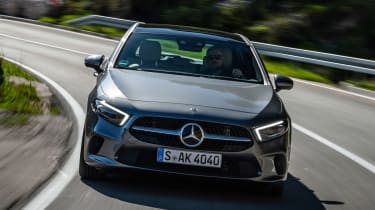 Mercedes will be hoping for a full five-star Euro NCAP rating as well, thanks to its latest accident mitigation tech. Active Brake Assist and Lane-Keeping Assist are included, as are a host of sensors from the S-Class. Quality is impressive, too. The blend of fine metals, plastics, wood and leather surpasses everything in the A-Class’s segment, as well as cars from the class above. Everything feels seriously luxurious.

The platform has been designed with electrification in mind, and an EQ A hatchback will materialise around the turn of the decade. 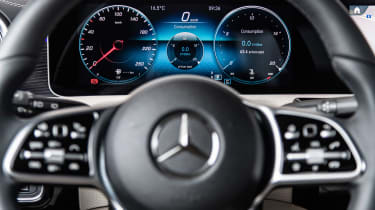 While the A 180 d is a development of the older 1.5-litre Renault-sourced dCi unit, the A 200 is a new 1.33-litre four-cylinder turbo, created within the same alliance. With customer attitudes to diesel changing, this is likely to prove popular in the UK. But this dinky new engine feels underpowered, and it can’t match the in-gear shove of the diesel. It sounds strained under hard acceleration, and the harsh engine note encourages gentler use of the throttle.

The A 200’s 51.4mpg fuel economy can’t compete with the A 180 d’s 68.9mpg best, either. The petrol car does sit two Benefit in Kind percentage points lower than the diesel, though, which may prove appealing to business users.

And while the A-Class can hold its own in corners, it’s clear that Mercedes has prioritised comfort over sporty appeal. The steering is light, and despite minimal body roll, it doesn’t feel like it’d take much to break the limits of grip. The slick seven-speed DCT box (a manual will be available later) had no trouble selecting the right cogs, however. 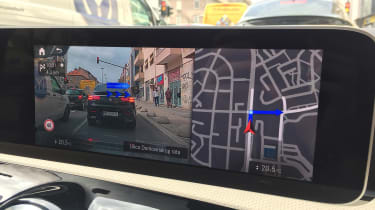 But the majority of these cars will spend their lives on motorways, and here, the new A-Class is better than ever. At a steady cruise it’s quiet, stable and composed. Bosses claim it offers ‘C-Class levels of comfort’ – an assertion that is substantiated after a few hours on the road. It feels like a true Mercedes, and is easily as hushed as an Audi A3.

Basic models come with a twist-beam rear axle, but every launch car had a multi-link set-up with adaptive dampers, although the latter won’t be available in the UK. On the whole, the set-up works well, but over harsh bumps it felt as if the suspension couldn’t keep up. We’ll have to wait until we try a UK-spec car before giving our verdict on ride comfort.

Merc has extended the A-Class’s wheelbase by 30mm, but while this would usually add more cabin space, that extra length has been consumed by all the new safety kit and internal packaging. Headroom in the back is better, but the floor is set quite high.

Get an alternative view on the technology in the Mercedes A-Class from our sister site Alphr...