Packed full of tech and a gorgeous interior, we try the new Mercedes A-Class in its entry-level diesel form 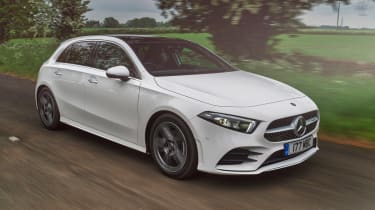 The A-Class has always felt like the cheap runt of the Mercedes range - but not any more. Though still its smallest, the A-Class now feels at least as opulent as many of Merc's larger siblings. While the performance of this 180 d variant won’t blow you away, it’s a smooth, refined engine which will allow you to save some cash to invest in that fantastic interior tech.

The Mercedes A-Class has come a long way in 21 years. Starting life as a clever – albeit dowdy – mini MPV. The latest fourth generation model, however, cuts a sharp, aggressive figure that Mercedes hopes will entice younger buyers to the brand.

We drove the latest car in Europe earlier this year, but this is our first chance to try the popular premium hatch in the UK. We're sampling the A 180 d here, powered by a familiar 1.5-litre diesel engine. Despite buyers' taste moving away from diesel, bosses still think this will be the biggest seller – helped by the fact that it’s cheaper to buy and run than the two petrol options.

Co-developed with Renault (only the ECU, transmission, and some ancillaries are Merc-specific) it’s an evolution of the unit from the previous A 180 d. On the face of it, a 7bhp increase (for 114bhp all-in) and an identical 260Nm of torque suggests little has changed. But the tweaks focus on efficiency and refinement instead of outright performance. 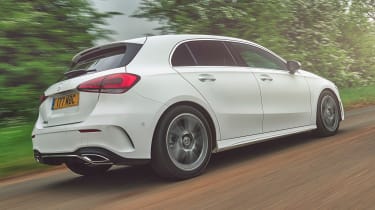 The changes have improved what was already a sweet unit. Save for slight rattles at start up and towards the red line under hard acceleration, it's very hushed. In fact, it's arguably more refined than some of Merc’s larger four-cylinder diesel units.

Combined with barely a whisper of wind noise, it means the A-Class is wonderfully quiet on the move. We'll wait for a direct comparison with its key rivals to assess whether it's more peaceful than an Audi A3, but it certainly seems like it.

The A 180 d claims to hit 68.9mpg, and we achieved well over 50mpg on our test route when paired with a seven-speed dual-clutch gearbox. The new Getrag transmission is impressively slick and responsive, and likely to be a better match for the A-Class than the six-speed manual that's due to join the range at a later date.

The diesel’s entry-level status in the A-Class range brings a compromise, however: the fancy Multilink rear suspension configuration of the A 250 and A 200 AMG Line is not offered with the 180 - a torsion beam setup takes its place.

Trying the two systems back-to-back (we used an A 250 for comparison) does reveal differences. On really bumpy roads, the torsion beam fidgets over ripples that the more complex design had long since shrugged off. The difference isn’t night and day though, and we'd argue whether many buyers will even notice – or indeed care.

Regardless of setup, AMG Line models equipped with 18-inch wheels can fidget around town, but on the move the suspension is at least as supple as any of its rivals - regardless of how the rear wheels are attached to the road. 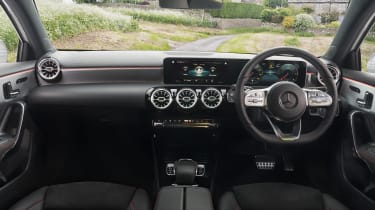 Smooth though it may be, the one thing the new A-Class really isn’t, is sporty. The lifeless, slow-geared steering makes it feel more lethargic than it really is. Grip is strong though, so it always feels secure. Just not exciting.

But inside the A-Class is truly class-leading. The cabin looks fantastic and feels more expensive than not just the BMW 1 Series and Audi A3, but the C-Class too. It's helped by the brilliant new infotainment system, which looks beautiful and on the whole is easy to use.

There are one or two caveats: first, the new touchpad design doesn’t feel as precise to use as the old click wheel, but the main issue is that the standard seven-inch displays, though a huge improvment on the previous model, lack 3D mapping and the endless customisation options of the upgraded dual 10.25-inch screens. Adding both to your A-Class costs an extra £2,395. It's an option worth speccing, and most of that cost can be offset by choosing the diesel variant over the pricier A 200.