SUVs are booming, and so are AMG sales. So the Mercedes-AMG GLC 63 S was almost inevitable... 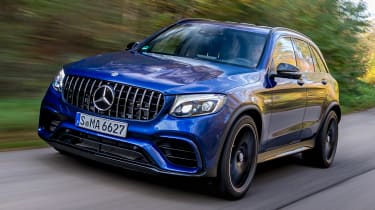 On paper, a car as fashionable, well-equipped and brutishly fast as this should be a recipe for success. The cheaper and slower Porsche Macan remains a more accomplished driver’s car, but it’s hard to argue with the GLC’s spacious and beautifully built cabin, characterful engine and impressive body control. However, with a host of high-power rivals on the way, Mercedes needs to keep a keen eye on its rear-view mirror.

If there is one type of car guaranteed to make money, it’s SUVs. In recent years, Mercedes has seen huge success with its crossover range – covering all bases with everything from the cute and cuddly GLA, through to the luxurious GLS and rugged G-Class 4x4.

It has also noticed a surge in popularity for its sporty AMG models. So mixing the two must make perfect sense, surely? In response to that very question, Mercedes has presented this: the all-new AMG GLC 63.

Lifting the familiar 4.0-litre twin-turbo V8 from the C 63 S and the new nine-speed MCT gearbox from the larger E 63 S, Mercedes offers a choice of two full-fat GLCs. The ‘entry’ version gets 469bhp, while the flagship AMG GLC 63 S (as tested here) boasts 503bhp and a whopping 700Nm of torque. 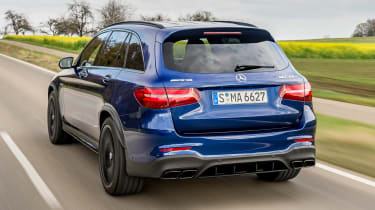 From the inside, neither version feels all that different to the semi-skimmed AMG GLC 43. The 63 doesn’t even do much in the cabin to separate itself from the conventional diesel cars. That’s no bad thing, however, as fit and finish is first rate. It’s on par with the latest Audi Q5, and finds itself trumped only by the new Volvo XC60. The driving position is high but fine, though the seats feel a little flat and lack support. 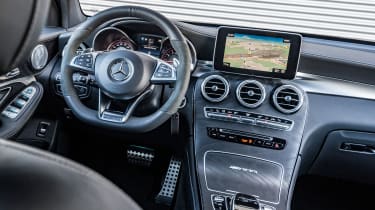 Turn the key and there’s no mistaking this GLC for one of the humble diesels, however. Our car had the optional (£1,000) sports exhaust fitted, bursting into life with a bellowing V8 roar characteristic of every current 63 model in the Mercedes range. Even the smallest blip of the throttle is enough to bounce echoes off nearby buildings, while placing your right foot flat on the floor produces a noise more akin to a hurricane at full chat.

Past AMGs had a more than a little in common with old-school American muscle cars, possessing a brutish nature that meant they were more accomplished in a straight line than they were through a series of tight bends. And while modern models are much improved, their ability to rip rubber remains intact. Leave the traction and stability systems off and the GLC will slip and slide out of low speed corners, spinning its tyres away from rolling T-junctions.

However, with the latest 4MATIC+ system, the GLC offers incredible traction over smooth tarmac. Our German test route offered little in the way of broken or potholed roads, but the huge 20-inch wheels followed ruts and tramlined over poorer surfaces. The big rims are standard on S models, and, along with the firm suspension, are likely to make for a slightly fidgety ride back in the UK. 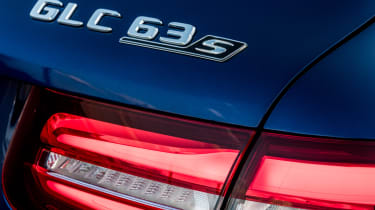 The steering is super sharp, though, offering almost twitchy feedback around the straight-ahead. The Macan feels more malleable, more agile, though the Merc’s tight body control suitably belies its size. The nine-speed dual-clutch gearbox rattles through the first few (admittedly short) ratios, but allows the GLC to settle into an impressively sedate cruise. Try to change down through multiple cogs too quickly and it’ll simply refuse, however.

Of course, in transition from four-cylinder diesel to AMG V8, the GLC has lost none of its practicality. The cabin still offers plenty of room for adults, while the 550-litre boot shames the Macan’s 500-litre load bay.

In just a few weeks we’ll be driving the flagship Alfa Romeo Stelvio Quadrifoglio in the Middle East. It should prove a more comparable match for the GLC – with an identical power output and similarly spacious cabin. Jaguar’s hotly-rumoured F-Pace SVR should arrive next year, too, with up to 575bhp from a supercharged 5.0-litre V8.