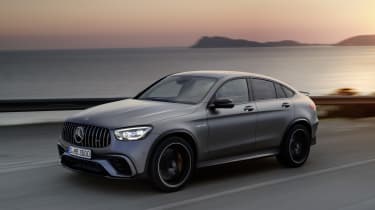 AMG’s efforts with the GLC 63 S results in a hot SUV that isn’t quite a true driver’s car, but it’s still an impressive experience nonetheless, especially thanks to that engine. The 4.0-litre unit’s flexibility is truly worthy of praise, and totally the centre of attention from behind the wheel. Whether you prefer the Coupe’s design to the regular GLC’s is up to you.

It takes just 3.8 seconds for the Mercedes-AMG GLC 63 S Coupe to accelerate to 62mph from a standing start. It’s a time that many supercar makers would’ve been proud of 15 years ago, and yet now you can stroll into a Mercedes dealership and buy a roomy SUV that makes it look easy.

It’s also a number that means that the refreshed AMG model, which gains the same styling and tech upgrades as the rest of the GLC range, is a match for the Alfa Romeo Stelvio Quadrifoglio in a straight-line sprint. The new BMW X4M and the Jaguar F-Pace SVR (at a languid 4.1 seconds each) trail behind.

Much like the 63-badged models across the rest of the Mercedes-AMG family, the GLC features a 4.0-litre engine that nestles a pair of turbos between the banks of its eight cylinders. As before, it’s available in two flavours: the standard version with 469bhp and 650Nm of torque, and the S model driven here, with 503bhp and 700Nm. Those numbers are carried over almost unchanged from the pre-facelift model, but that’s no bad thing; regardless of where it finds a home, it’s one of the finest engines on sale today.

Performance is staggering: on the road it feels every bit as fast as the claimed numbers suggest, and there’s no letting up as the relentless shove pushes well into three figures. The nine-speed gearbox has revised software to return faster, smoother changes. Under hard acceleration each upshift fires home almost seamlessly, while a multiple downshift function allows for quicker kickdowns during overtaking manoeuvres. A button in the centre console allows the driver to take full control of the gearbox via the steering wheel-mounted paddles. 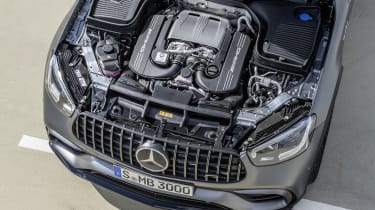 If there’s a small nit to be picked about the powertrain, it’s that the post-emissions tweaks exhaust doesn’t quite deliver the thunderous noise it once did. You’d only notice if you had spent time with its predecessor though and, Jaguar F-Pace SVR aside, the GLC 63 still makes the most exciting sound in this class.

The chassis changes transform the driving experience compared with the standard GLC, too. Where the conventional car feels a little heavy and lethargic, the 63 turns into corners sharply, and offers more throttle adjustability mid-corner than seems sane in a big-ish SUV. A range of chassis upgrades, including an electronic locking differential for the 4MATIC four-wheel drive system, dynamic engine mounts (standard on the S), and an AMG-tuned air suspension set-up are to thank for this. It’s not got the uncanny, hot hatch-like agility of a Porsche Macan, nor can it quite match that car’s compliance over bumps, but it’s still hugely impressive.

As with the rest of the recently revised GLC range, the AMG 63 models gain a range of cosmetic upgrades both inside and out. The head and tail lamp designs are new: the units are slimmer at the front, and both ends feature more distinctive LED lighting signatures. Around the back, the lower edge of the bumper features four 90mm exhaust pipe trims, while there's a new set of 21-inch wheels available as an option.

As before, the Coupe features a sloping roofline that tapers towards a rounded bootlid, which for AMG models is capped off with a tall lip spoiler. You can make your own mind up about the looks of the Coupe, but it’s hard to argue with the sort of on-road presence that buyers of these cars love. 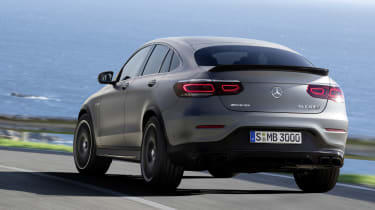 Inside, the cabin is lifted by a new steering wheel design, and whose alcantara-trimmed rim feels firm and slim – exactly what you want from a performance car. The spokes gain touch-sensitive pads to control the updated MBUX infotainment system and the customisable digital dials, each featuring AMG-specific functions and displays. Elsewhere, there’s some carbon fibre trim on the centre console, while the seats are finished in a mix of grey and black leather, with yellow highlights and stitching.

As with other versions of the GLC Coupe, the roofline brings its own set of compromises to practicality. Anyone sat in the back that’s more than six foot tall will be brushing their head against the ceiling, boot space, though still a reasonable 500 litres, is 80 less than you get from the regular GLC.

Prices for the Mercedes-AMG GLC 63 SUV start from £74,599, rising to £90,845 of the Coupe model tested here in Premium Plus trim. The S costs just over ten grand more than the standard model, while the step up from SUV to Coupe adds £2,490. The Premium Plus package is a £2,500 option, and includes a Burmester sound system, a panoramic sunroof and keyless entry.