Does the BMW X4 M Competition offer anymore thrills with its coupe body over its full SUV shaped sibling, the X3 M? 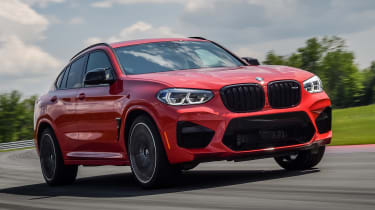 The new X4 M Competition is a performance BMW that’ll you’ll rarely spot in the wild. It’s a niche stacked on top of another niche. But of course, it drives almost exactly the same as the X3 M Competition. That means an assured all-wheel-drive system that does well to control and allow you to play a little with the weight, precise steering, a likeable, indulgent six-cylinder powertrain but a ride that’s rock hard. If you’re in the minority that prefers the look, the £3,000 premium you need to pay over the X3 isn’t too bad to stomach.

It’s not just the X3 BMW M’s engineers have managed to their hands on: The X4 coupe-SUV has also been fettled by the Munich brand’s performance wing and is also on sale in Britain now ahead of hitting the roads in September.

Although you’re quite unlikely to see one. The X3 M Competition itself is bound to be a rare spot on the UK’s roads, but the X4 version even more so. BMW predicts that just around 150 Brits will take the plunge on the brand’s £80,110 rival for the Mercedes GLC 63 S Coupe in its first year on sale.

The redesigned body results in some predictable alterations on paper. At 4,658mm from nose to tail, it’s marginally longer, while the roofline sits 49mm lower at its tallest peak too. Additionally, the rear track is a little wider. The nipped rear end results in a boot sizing up at 525 litres with the rear bench in place, which is only a 25-litre drop on the X3 M Competition. Fold the rear bench flat and the 1,430-litre room on offer is a little more down on the hot X3’s 1,600 litres.

But that’s about it. Everywhere else this car is a direct match for the X3 M Competition, with the same 4.1-second 0-62mph dash and 155mph limited top speed, with the option of having the limiter lifted to 174mph for a fee.

Key to producing those figures is arguably the X4 M Competition’s most important ingredient: the engine. It’s a 3.0-litre, turbocharged straight-six, box-fresh from BMW M and developed with an emphasis on lightness and an instinctive free-revving nature.

It’s not a total step back to the best straight-sixes from M cars of old, but it’s certainly progress, and it’s impressive how BMW’s engineers have managed to tailor this turbo unit. It’s also the engine due under the bonnet of the next M3. In truth, in both the X3 and X4 M Competition you get the sense that the unit’s ultimate performance has been capped a little so that the next hot 3 Series can land in 2020 with even more power up its sleeve. 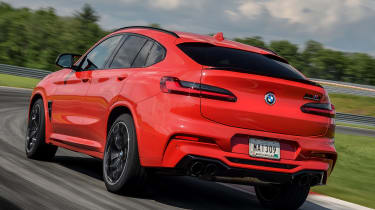 It’s no coincidence that the 503bhp power output is what you’ll get from the V8 powered Mercedes GLC 63 S and the slightly deeper, 2.9-litre V6 turbocharged Alfa Romeo Stelvio Quadrifoglio. But cars like this really don’t need more power.

4.1 seconds to 62mph from standstill is absurd in a near two tonne SUV, and the way the X4 M Competition surges forwards under full throttle really doesn’t leave the performance aspect of this car to question. The adaptive M Sport exhaust system is standard kit on the Competition, and by and large you can wring out a sweet yelp from the 3.0-litre unit as it heads towards its redline. Throttle response is nice and linear too. There’s less of the boom and bust nature of the Mercedes GLC 63 S’s 4.0-litre V8, even if that is an engine which overwhelms with its presence compared to the BMW’s more focussed straight-six. The 542bhp, supercharged Jaguar F-Pace SVR is probably sillier still.

Ultimately, a fun, unhinged edge is probably this car’s most auspicious absence, given that’s the characteristic many of the X4 Competition, and indeed the X3 Competition’s rivals offer in the bucket load. It’s just as fast but far more serious in the face of the competition, which probably goes some way to explaining the totally uncompromised, rock hard low and medium speed ride quality. Even in Comfort mode the X4 M Competition will have you whimpering over potholes, and though you can alter the damping you really don’t need to explore the Sport and Sport Plus options, as there’s very little difference between the various modes. 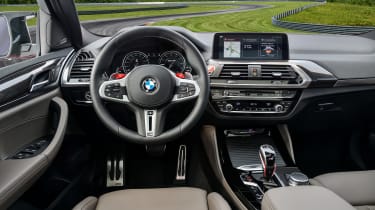 Again, like the adaptive suspension, the different steering modes you can flick through feel fairly fruitless, only injecting unnecessary and artificial weight. Keep the wheel set in comfort and you’ll probably get the best blend of resistance, weight and sensitive feedback that feels on the money for a modern M division product. It’s on the money for a performance SUV that’s decently agile given its weight too, but the smaller, skimpier, and since-departed Porsche Macan Turbo Performance Package would probably leave the X3 M or X4 M behind on a B-road. We’ll have to wait to see what the next hot Macan is capable of when it arrives soon.

Unlike the xDrive system used on the M5, the ‘rear-biased’ X4 M Competition’s setup doesn’t feature a strict rear-wheel-drive mode. As such, row back on the traction control settings and the front axle will always be there to step in if the back becomes unhooked under power. Perhaps it’s not as fun as it could be, but on track you can quickly get up to speed given the grip on offer and the fine body control too. Vented 395mm disks at the front and 370mm units at the rear provide great and controlled stopping power.

Elsewhere, the interior feels well built and appears classy, using the previous-generation BMW dashboard layout - not a bad thing at all - while subtle M-branded badges, switches and sports seats separate the X4 M Competition from the rest of the X4 range.